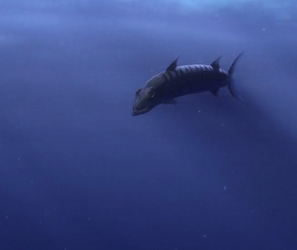 He's just swimming there... menacingly!
Finding Nemo is easily one of, if not, the scariest movie Pixar has ever come up with. With ominous places to the left and terrifying monsters to the right, it's quite clear that Pixar was trying to go for something Darker and Edgier with this one and is probably the closest Pixar has ever gotten to making an actual Horror Movie.