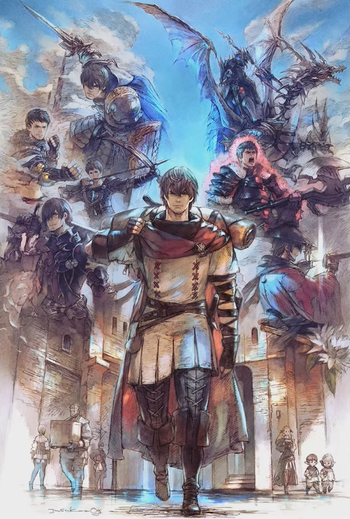 The Meteor Survivor, the Player Character stand-in used in promotional artwork and trailers, along with the various jobs he's taken up over the years.
Click here to see the jobs portrayed Clockwise from top-right: as a Dragoon in Heavensward; as a Warrior in A Realm Reborn; as a Samurai in the Doman half of Stormblood; his current self Walking the Earth, job unknown; a Dark Knight in Shadowbringers; an Archer in Legacy; a Monk in the Ala Mhigan half of Stormblood; and a Paladin in Endwalker
Advertisement:
"This world is not yours to end... This is our future. Our story."

The Player Character, and The Protagonist.

An Eorzean adventurer from one of three city states. Those who started in 1.0 witnessed a star shower and met an Archon of the Circle of Knowing and were then gifted with the Echo and became entwined with the war with Garlemald. Players are implied to be from outside of Eorzea entirely (or at least returning from an extended journey abroad), and have come (or returned) to Eorzea for reasons the player may define in the opening. In the process of proving themselves to their adopted city-state, they too meet a (now-former) member of the Circle, discover their possession of the Echo, and become involved in a conflict not only with the Garleans, but with a perhaps older and more sinister power...

Disciples of the Hand and Land

The various Gathering and Crafting classes provide examples of…