A new organization founded after the Calamity from the remnants of the "Path of the Twelve" and the "Circle of Knowing". Working independently from the three Grand Companies and owing allegiance to no nation, their goal is to ensure the future of Eorzea as a whole. Several of their members possess the "Echo", a divine power that grants immunity to the "tempering" of the Primals and the ability to re-live another's past. 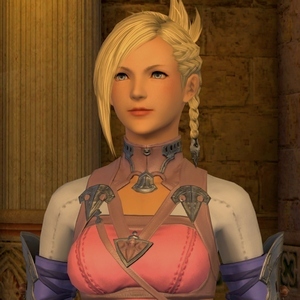 Race: Highlander Hyur
Epithet: The Word of the Mother, Oracle of Light
Discipline: Gladiator, Miner
"Come what may, we Scions will never give up the fight."

The current leader of the Scions of the Seventh Dawn. Her charisma and compassion make her a natural leader. 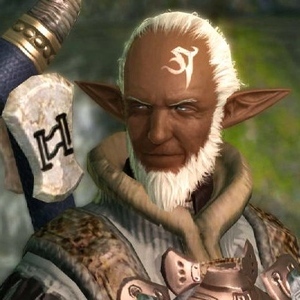 The former leader of the Circle of Knowing, who disappeared in the wake of Bahamut's rampage. It is believed that his efforts saved the world from destruction, but his current whereabouts are unknown. 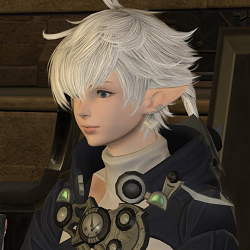 Race: Wildwood Elezen
Discipline: Arcanist, Academician (Scholar), Sage
"Whenever the realm is threatened, be it by primal, Ascian, Garlean or any other, we take up arms in her defense, that all in Eorzea may live to see a brighter tomorrow."

A new arrival to Eorzea, the grandson of Louisoix and the elder of the Leveilluer twins. He approaches the world with a wry and pragmatic view that sometimes borders on heartlessness, but his desire to save Eorzea from the trials of the Seventh Umbral Era is sincere. He is one of the Warrior of Light's most constant companions, playing a large role in the main storyline from 2.0 onwards. 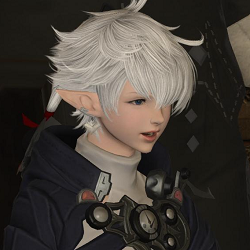 Race: Wildwood Elezen
Discipline: Arcanist, Gladiator, Red Mage
"Our grandfather would never entrust the fate of the realm to despots who rewrite history to their convenience!"

A new arrival to Eorzea, the granddaughter of Louisoix and the younger of the Leveilleur twins. She is far more cynical than her brother and heavily criticises the conduct of the Grand Companies in the aftermath of The Calamity, specifically taking issue with (what she perceives to be) the lack of respect shown towards her grandfather and the Warriors of Light. 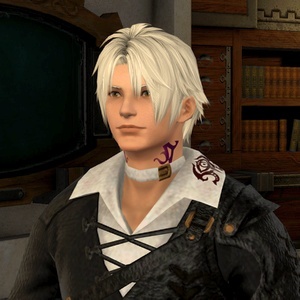 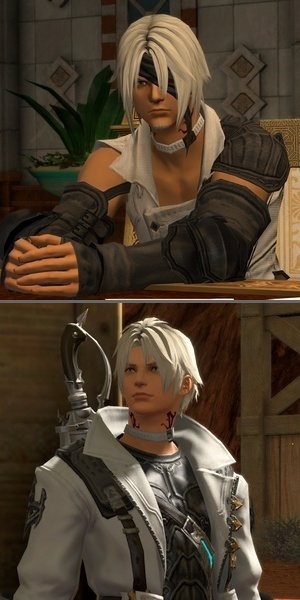 Race: Midlander Hyur
Discipline: Gladiator, Rogue, Gunbreaker
"I happen to be thoroughly enjoying the company of these ravishing young ladies and, gods willing, will still be doing so come sunrise."

An intelligent and silver-tongued bard that guides players who begin their story in Ul'dah. He uses his charismatic wiles to obtain information to help aid the Circle of Knowing. 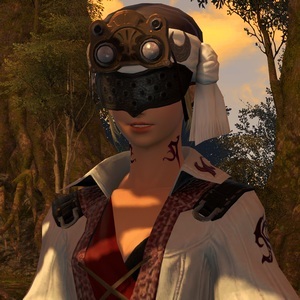 An energetic and light-hearted Pugilist who helps to guide the Player Character if they begin in Gridania. Though capable, Yda tends to be quite lazy and makes excuses to get out of work she feels is beneath her. 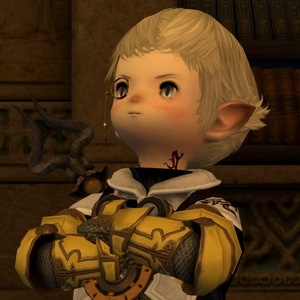 Race: Plainsfolk Lalafell
Discipline: Thaumaturge
"It is precisely when things appear to be proceeding according to plan that we must needs steel ourselves for impending danger."

A Lalafell Thaumaturge who works together with Yda and helps to guide the Player Character if they begin in Gridania. 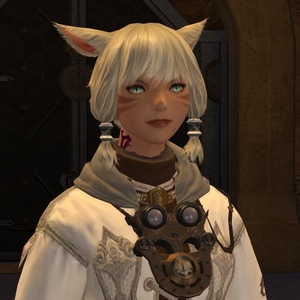 Race: Seeker of the Sun Miqo'te
Discipline: Conjurer, Sorceress (Black Mage)
"Without the illumination of knowledge, we but vainly flail at specters in the dark."

A calm-hearted Conjurer who helps to guide the Player Character if they start in Limsa Lominsa. Though Y'shtola can sound detached at times, she possesses a strong heart and sense of justice. 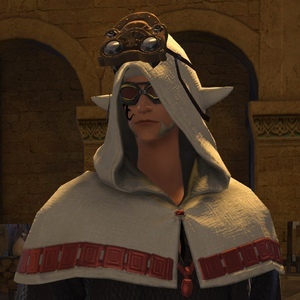 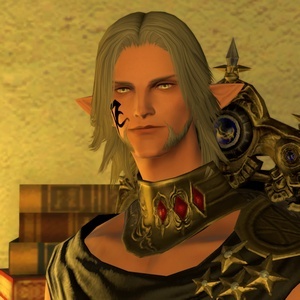 Race: Wildwood Elezen
Discipline: Arcanist, Astrologian
"The survivors gather, and ignite a fiery dawn to burn away the glowering shroud. Ah, but destiny, thou art beautiful..."

An Elezen in the Scions who researches the Primals. He is a mysterious sage and prophet who correctly foresaw the coming of the Seventh Umbral Era. 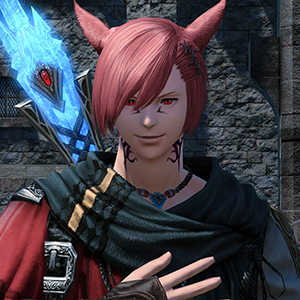 Race: Seeker of the Sun Miqo'te
Discipline: All-Rounder
The newest member of the Scions, G'raha Tia becomes an ally after his self from the First transfers to the Source, merging his memories and soul with the version of him still on the Source. For more information see here for his first appearance under NOAH and here for him as the Crystal Exarch. 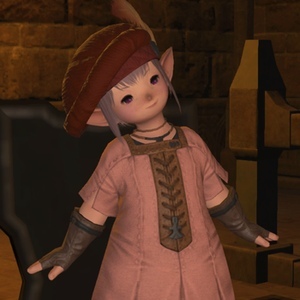 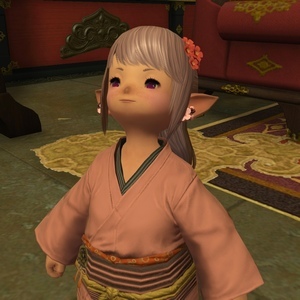 Race: Dunesfolk Lalafell
Discipline: Miner, Arcanist, Weaver, Culinarian
"She sings! She dances! She can help you pay your taxes!"

A plucky Lalafell secretary who manages the front of the Scions' organization. As time goes on Tataru begins to spend more time in local social establishments and talking with the average citizens of Eorzea. This results in her having her ear to the ground on local rumors, and going ons making her the go-to girl in the Scions for non-magical intelligence in addition to her increasing logistical and resource management. 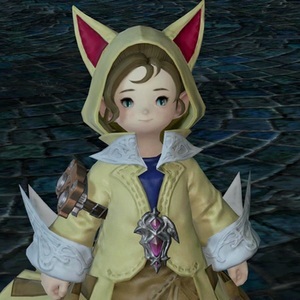 Race: Plainsfolk Lalafell
Discipline: Conjurer
"On the cusp of an Umbral Calamity, souls blessed with the power of the Echo invariably appear."

The adopted plainsfolk lalafell daughter of Galuf Halm Baldesion and a member of the Students of Baldesion, Krile is an old friend of Minfilia's who comes to aid the Scion's of the Seventh Dawn in order to help out after the annihilation of her island home. 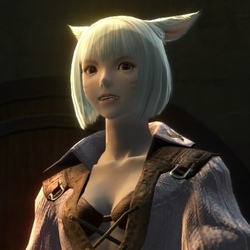 Click here for her look in A Realm Reborn 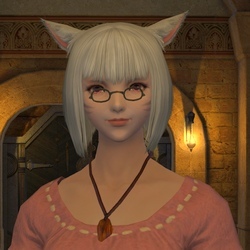 Race: Seeker of the Sun Miqo'te
Epithet: The Songstress of Ul'dah.
Discipline: Culinarian
"Over the years I've learned that it is better to busy yourself with things you can control rather than worry about things you cannot."

A mysterious Miqo'te who took in Minfilia when her father died. 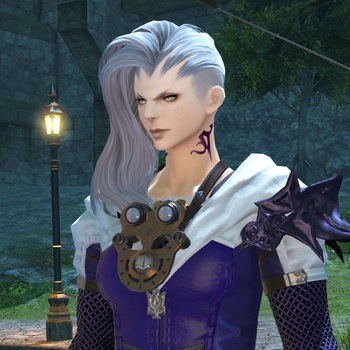 Race: Seawolf Roegadyn
Discipline: Marauder
"I've yet to put my theories to the proof, but I"ve got a good feeling about this."

A Roegadyn Seawolf, Yda's (honorary) sister and an ally of the Scions, from Sharlayan. She came to aid the Scions with getting to Iceheart, with some encouragement from Urianger, bringing with her White Auracite to use as an experiment. 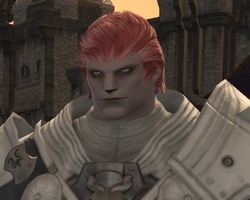 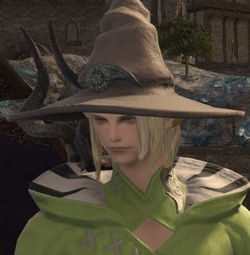 Two adventurers who are added to the ranks of the Scions since their move to the Rising Stones. 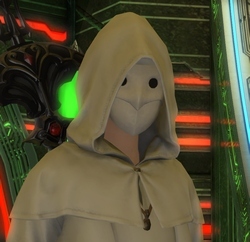 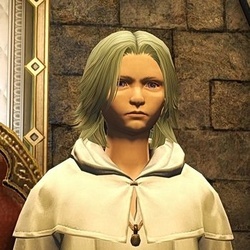 A mysterious masked youth with intimate knowledge of the Warring Triad eikons sealed away on Azys La. He warns the Warrior of Light of the dangers of other primals trying to absorb the Triad's aether like the Knights of the Round have before. Eventually, he leads the scions against the Triad themselves. After the fall of all three Eikons, Y'shtola formally adds him to the Scions proper. 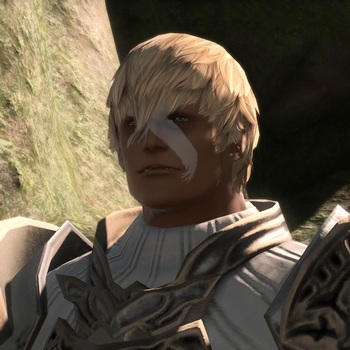 An adventurer born in occupied Ala Mhigo who left his homeland and joined the Scions after an unexplainable dream brought him to the door of the Waking Sands.

Other Scions and Crystal Braves
Miscellaneous Scions who make up the various adventurers throughout the Waking Sands and Rising Stones.

The Crystal Braves are an organization created by Alphinaud in order to fight for peace throughout Eorzea, unaffiliated with any of the city-states. Which turns out to be funded by the Syndicate as part of a grand scheme by Teledji Adeledji to gain control of Ul'dah. Both organizations use the Rising Stones as a base, located within Revenant's Toll. Both organizations are grouped together and often share the same goals.