Due to the story's advancement and the fact some articles would otherwise be all white, there are unmarked spoilers below. You have been warned. 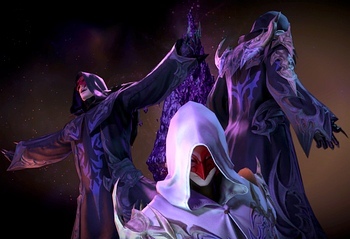 The Three Paragons and Zodiark's Crystal note From left to right; Lahabrea, Elidibus, and Emet-Selch
"We can't accept it! We won't accept it! It will be ours again—a world free of sorrow!"

A cult of dark sorcerers that have lurked in the shadows of Hydaelyn for millennia. It is said that they taught the Beastmen tribes how to summon their primals, and with the coming of the Seventh Umbral Era, their actions are becoming more overt. They are worshippers of Zodiark, a slumbering god of chaos inferred to be the dark opposite of Hydaelyn. The Ascians themselves are immortal and formless, and use "Dark Crystals" to possess living hosts so that they can interact with the physical world.
Advertisement:

The three most evident leaders of the Ascians. The Paragons of the Source are significantly more powerful than other, lower ranked Ascians, and act as major villains across all storylines. 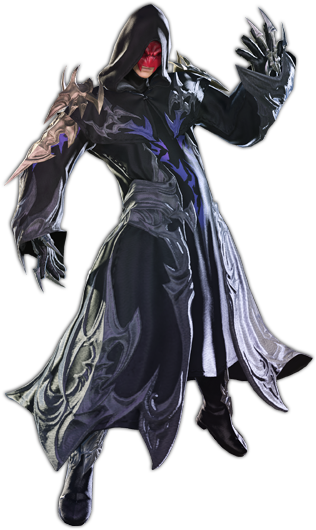 The Abyssal Celebrant
Click here to see him as an Ancient, pre-Final Days 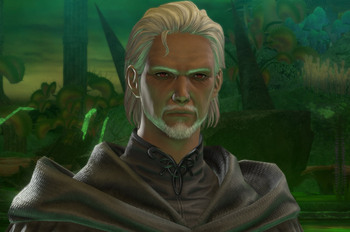 Race: Ascian
Epithet: The Speaker
"The end of your tale is but the beginning of another: the tale of the Crystal's demise!"
A powerful sorcerer who bears the rank of "Overlord" among the Ascians, and who can be identified by the red mask he wears. He seems to be helping the Garlean Empire advance their agenda by sowing chaos in Eoreza and helping the Beastmen to summon their Primals. He possesses the body of Thancred sometime during the events of the story. His goal is to manipulate Gaius van Baelsar into completing the Ultima Weapon so that the ancient artifact at its heart can be used to advance the resurrection of Zodiark.
Elidibus

The Emissary
Race: Ascian
Epithet: The Emissary
"At times I stand with my brethren. At times I stand against them. All that I might steer mankind and the very star upon their true course."
An Ascian who appears in a white with gold trim cloak, not far into the Seventh Astral Era. He claims to have no quarrel with the Scions, or the Warrior of Light, but seems to be stirring up trouble in Eorzea just as much as Lahabrea. He apparently knows secrets of the Echo that neither Minfilia nor the Warrior of Light are yet aware of, and tells them that the Ascians and those who possess the Echo are not so far apart.
Emet-Selch (Unmarked spoilers for Stormblood and Shadowbringers) 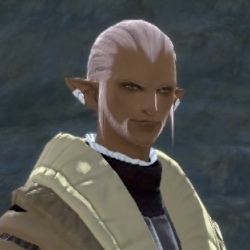 A mysterious Elezen mage who appears in the 1.0 storyline. He does not cast a shadow, and it is inferred that he is an agent of the Ascians. 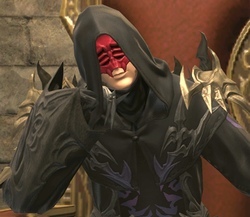 The Majestic
Race: Ascian
"Unlike the others, I am not given to waiting. I shall take that staff, and bring about the next Rejoining."
An Ascian overseer introduced briefly at the very tail end of The Stinger of the initial 2.0 release and brought into greater prominence in the patch content, particularly patch 2.5, Nabriales is the Ascian responsible for teaching Iceheart how to summon Shiva, and potentially for how the primals were re-summoned in their "Extreme" difficulty. Contrasting Lahabrea's and Elidibus's personalities, Nabriales isn't one for sticking to the shadows or respecting diplomacy.
Igeyorhm 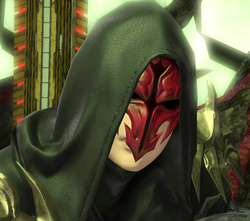 A female Ascian in league with Lahabrea and the one in charge of overseeing the group's plans within Ishgard.

Emmerololth
A briefly seen Ascian mentioned in Galuf Baldesion's notes within Eureka Hydatos. She sought to control the primal Eureka, only to be destroyed by Galuf and his three allies.
Loghrif and Mitron (Unmarked 5.4 Spoilers) 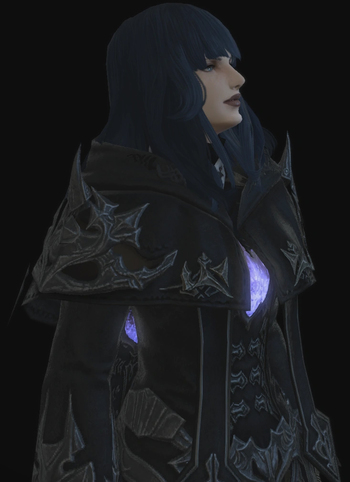 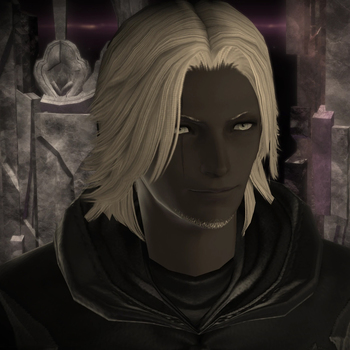 Mitron - The Heart of Eden

Two briefly mentioned Ascians whom Emet-Selch entrusted with increasing Light's sway in The First to help trigger a Calamity of Light. The pair were slain by Ardbert and his allies, but in doing so caused the Flood of Light to ravage the world. In truth, while Loghrif was slain, she was reincarnated as a the Oracle of Darkness Gaia, while Mitron, attacked by Ardbert's Blade of Light that was enhanced by the unbalanced light on the First, mutated the Ascian's body into the first Sin Eater Eden, while his consciousness was sealed away as Eden ushered in the Flood. Mitron serves as the main antagonist of the Eden raids series, hoping to reawaken Gaia's memories as Loghrif.

"Imagine it! Bound no more by the shackles of moldering memories, of damnable duty! Free at last to live for the moment!"

A mysterious Ascian appearing to Zenos at the conclusion of Shadowbringers main story. Despite being an Ascian, he quickly supports Zenos and forms with him the Telophoroi, a group dedicated to bringing the Final Days.
Altima, Deudalaphon, Halmarut, and Pashtarot
The four remaining Convocation members, of whom little is known.

Other Ancients (Spoilers for Shadowbringers and Endwalker) 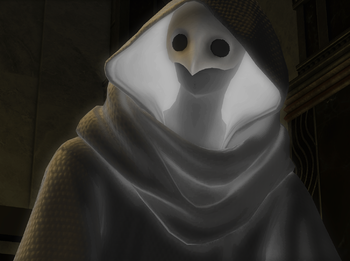 Click here to see him as an Ancient, pre-Final Days 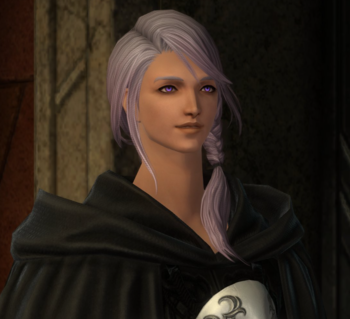 Race: Ancient
Discipline: Soulseer (Bard)
"Nay, there is no cause for alarm. I am simply a shade. Here and not here."

An Ancient appearing in the city of Amaurot. He is the illusion of one of the old inhabitants of the city, recreated by Emet-Selch out of loneliness. Unlike his fellow citizens, he is aware of his nature as a shadow, and is the one to reveal the first glimpses of the Warrior of Light's true nature to them. He used to be a close mutual friend of both Emet-Selch and Azem. 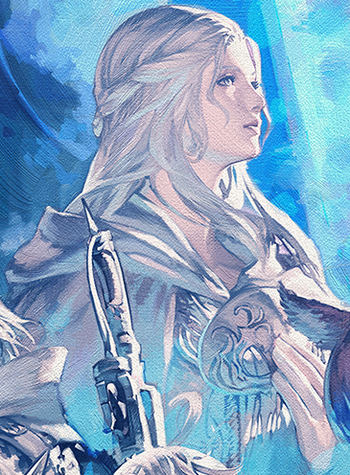 Heart of Hydaelyn
Race: Ancient
Discipline: All-Rounder (Paladin, White Mage, Dancer)
"Lands that stretched on forever. Skies one could drown in. The heartbeat of nature, silent yet strong. And amidst it all a people. Beacons of light and life. Laughter that warmed my heart like naught else before. They are my meaning and my purpose. My love. In spite of... Or perhaps because of this, I choose to believe. In mankind's potential. In his ability to find a way forward. So let there be no way back. From that temptation I sunder us. No more shall man have wings to bear him to paradise. Henceforth, he shall walk."

An Ancient whose hologram appears in Anamnesis Anyder. She was originally an adventurer who held the seat of Azem before giving it up to the final Azem, as well as the leader of the faction that eventually created Hydaelyn, with Venat offering herself to be Hydaelyn's core.

See Hydaelyn's entry in here for her post-Sundering identity. 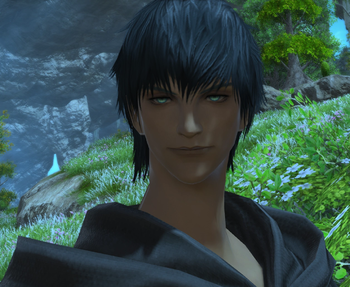 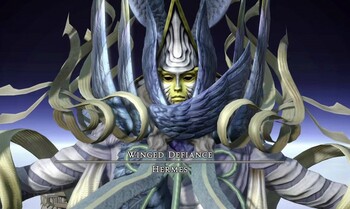 "How can you all accept this...aberration? Then I wonder...am I the aberration for thinking thus? And I am filled with dread..."

The ancient whose soul was inherited by the Ascian Fandaniel. Before he joined the Convocation of Fourteen and took on his more well-known title, he was Hermes, overseer of the research facility Elpis.
Azem 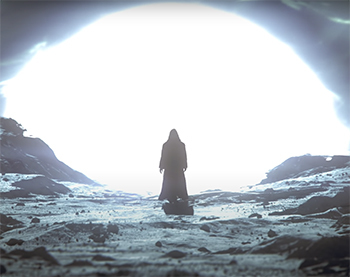 The Sun
Race: Ancient
Epithet: The Traveler
"Herein I commit the chronicle of the traveler. Shepherd to the stars in the dark. Though the world be sundered and our souls set adrift, where you walk, my dearest friend, fate shall surely follow. For yours is the Fourteenth seat—the seat of Azem."
— Emet-Selch dedicating Azem's memory crystal.
The mysterious fourteenth member of the Convocation who refused to participate in the summonings of both Zodiark and Hydaelyn.
The Watcher
An entity created by Hydaelyn to watch over Zodiark's prison on the moon. 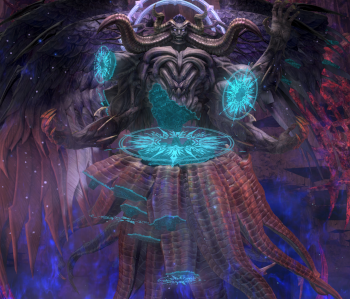 Eternal Darkness
"We are the savior.
We are the guardian. The keeper of natural order.
We are the martyr. The bestower of new beginnings."

As the Final Days threatened to destroy the world, Fandaniel discovered that the source of the devastation could be shielded against with great amounts of aether. To this end, the Ancients sacrificed half of their entire population to create the most powerful being their creation magicks ever produced, the first Primal Zodiark. Aspected to darkness aether, the aspect of activity, Zodiark enforced the ambient aether around Etheirys and forestalled the Final Days. To undo the ravages the Final Days had on the world and restore it to hospitality, the remaining Ancients sacrificed half of their population to empower Zodiark to Terraform the world.

A schism between the surviving Ancients over whether or not to continue making sacrifices to restore what was lost lead to the creation of Hydaelyn, who defeated Zodiark and sundered him into fourteen pieces. The surviving members of the Convocation, now the Ascians, worked over the next ten thousand years to rejoin the sundered pieces of Zodiark so they might sacrifice all current life on Etheirys that was not a sundered soul so that Zodiark may resurrect those initially sacrificed to summon him.

Warriors of Darkness
A mysterious group of individuals holding the power of Echo summoned by the Ascian Elidibus and led by the warrior Ardbert, a dark counterpart of some nature to the Warrior of Light.Check their page on The First
Spectral Warriors (Unmarked Spoilers for 5.3)

"In the name...of the Light...I shall vanquish...the Darkness... I shall deliver the world from its doom!"

When Elidibus as Ardbert takes control of the Crystal Tower, he uses the Exarch's summoning method to call upon Warriors of Light (and Hildibrand for some reason.) from the Shards. Rather than complete beings, however, he manifests mere slivers of their souls as spectral warriors single-mindedly obsessed with destroying Darkness. They serve as enemies during the Heroes' Gauntlet.
The "Warrior of Light" (UNMARKED SPOILERS)

"If you would usher in the end, then with my all shall I oppose you... As the avatar of those mortal heroes, who fought unfalteringly, in all their imperfection! As the Warrior of Light incarnate! Come, Warrior of Darkness! Let us finish this!"

In his personal quest to bring about the Rejoining, Elidibus had at times posed as Warriors of Light to further his goals. In his final confrontation with the Warrior of Darkness, he uses Ardbert's body to assume the form of the first Warrior of Light in Norvrandt's ancient history, calling upon his powers to destroy his nemesis.Check the Ascians' Primal folder here