A character page for Final Fantasy XIV antagonists that aren't Ascians, Garleans, Primals, Raid content, or the villains of the Disciple of War, Magic, Hand or Land questlines.

Due to the story's advancement and the fact some articles would otherwise be all white, There are Unmarked spoilers below, you have been warned.

The Phantom Thief/The Thief of Many Faces/ Ellie and Cecy
The main villain of the Hildibrand story, the Phantom Thief is a brilliant master of disguise who loves to play around as he secures his quarry. His real face is that of a dark-skinned midlander hyur wearing the rogue's gear set.

In reality, the thief's identity is a duo, Ellie and her sister Cecy, the two remnants of the Sil'dihn bloodline who seek revenge for the destruction of the city-state, and intend to do so by zombifying every citizen of Ul'dah 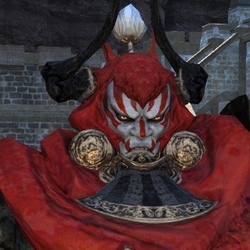 Yep, that one. And that one, and that one too. Gilgamesh, ever the intrepid interdimensional traveler, managed to stumble his way into Eorzea from the void and immediately set about finding new and powerful weapons to obtain. Unfortunately, he was separated from his eternal partner Enkidu... so he tamed a rooster and painted it green to keep him company.
Ultros and Typhon

The duo is back again. In this world, Ultros is the result of Thaumaturge experimentation within the void, and now works for the coliseum. Ever a skirt chaser, he intends to help a rising gladiator cheat in a tournament to split the prize. When backed into a corner, Ultros can count on the help of Mr. Typhon to challenge anyone.

The Grand Sers
Race: Midlander Hyur(Orland), Wildwood Elezen(Gonspart and Dorys)
Discipline: Dragoon(Orland), White Mage(Gonspart), Back Mage(Dorys)
Shortly after discovering Gigi, Hildibrand is alerted to a scam within Ishgard conducted by individuals claiming to be members of the Heaven's Ward. The Grand Sers are three former knights of the Holy See who have grown too old to perform their duty. They seek Gigi out in the hopes of using him in a scheme to restore their lost youth.
Advertisement:
The Kugane Wolf Burglar
Race: Lupin
Discipline: Ninja
A mysterious thief who robs merchants in Kugane while leaving behind a calling card.
Master Akebono
Race: Othard Hyur
Discipline: Alchemist
A rich business mogul in Kugane who has recently acquired the legendary sword known as the Soboro Sukehiro, becoming a target for the Kugane Wolf Burglar. As such, he has hired the equally-legendary mercenary Yojimbo to guard his new investment. 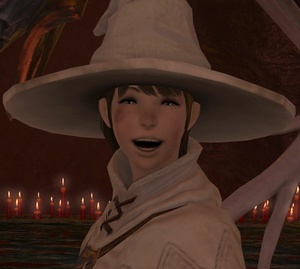 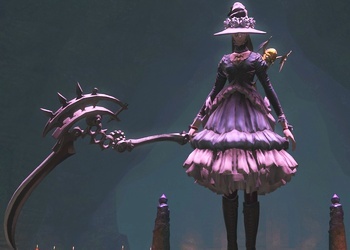 Race: Midlander Hyur
Discipline: Conjurer
"Look, Avere! All these people have come to make you a gift of their souls! Isn't that kind of them?"

A would be adventurer and conjurer whose tragic expedition through Tam-Tara Deepcroft caused her sanity to unravel and led her into delving deep into dark magic and necromancy. 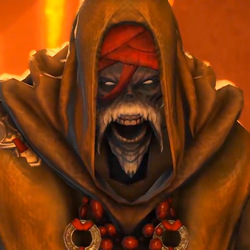 Race: Human Lich
Discipline: Necromancer
"Mine is a noble art, the path to salvation of the body and soul."

An undead necromancer who is responsible for the events of the Palace of the Dead. He seeks a way to cheat death and gain immortality. 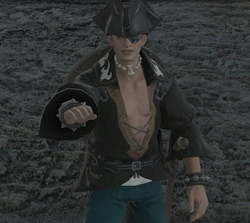 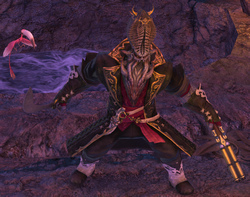 The captain of the Serpent Reavers, a band of pirates that have been tempered by Leviathan the Lord of the Whorl. 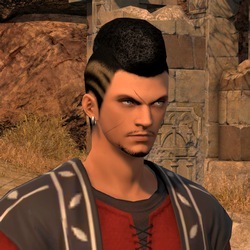 Race: Midlander Hyur
A merchant in Ul'dah who mostly operates in Camp Drybone in Eastern Thanalan. He has been abducting people at the behest of the Amalj'aa to be sacrificed to Ifrit.
The Lambs of Dalamud
An Apocalypse Cult that formed in 1.0 as a result of the descent of the moon Dalamud. They believe that a blood sacrifice would bring it down to purify the land. After the Calamity, the Cult is in denial that the descent of the moon was stopped. They make dealings and pacts with the voidsent and hold rituals in the keep of the fallen White Mage city of Amdapor, the Tam-Tara Deepcroft and Northern Thanalan.
Siren 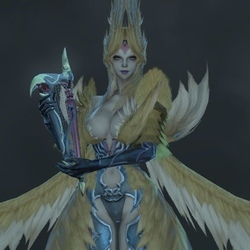 A creature that lives on the Isle of Umbra in Western La Noscea. She has the ability to entice sailors with her voice and control the corpses of pirates she has taken. After making a quick appearance in the main storyline, she took up residence in Pharos Sirius as its dungeon boss. 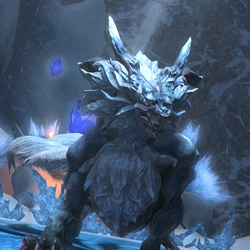 The final boss of the Snowcloak dungeon, and a mighty hoarhound named after a being from legend. He guards the aetheryte crystal that leads to Iceheart's domain as Shiva.
The Griffin/Illberd Feare
"For Ala Mhigo!"
An Ala Mhiggan revolutionary who attempts to instigate an all out war between the Eorzean Alliance and the Garleans stationed in occupied Ala Mhigo.

For more information on him and his non-Griffin identity see the Illberd folder under the Ala Mhigo section of Final Fantasy XIV The Eorzean Alliance. 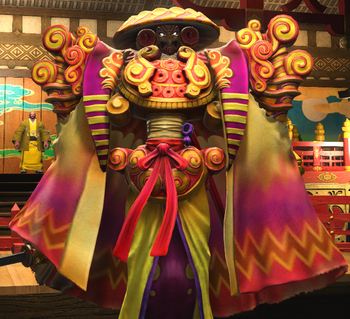 "If you desire my strength, you must pay my price."

A powerful sword for-hire who will aid whoever can afford his high prices. Accompanied by his dog, Daigoro. They are fought in Kugane Castle when a band of shinobi hire him to aid in their revolt to oust foreigners from area.

He is eventually revealed to be none other than Gilgamesh, having travelled to Kugane since the events of A Realm Reborn.

Eureka's Avatar
Seekest thou...power? Power to smite thine enemies? To cast down the wicked and raise up the righteous?

A mysterious garbed man who has appeared in the Isle of Val during the Warrior of Light's expedition there. He claims to be able to give a great power to those wishing to seek it.

A villain from the First who was responsible for many of the world's woes before the Flood of Light. The First's Warriors of Light, led by Ardbert, pursued them in the hopes of liberating the world from their tyranny, but in so doing, ushered in the Flood of Light.

In truth, the Shadowkeeper was Cylva, an elven swordswoman who was a member of Ardbert's party. Acting under the guidance of the Ascians, she helped the Warriors of Light gather the crystals for the purpose of ushering in an Umbral Calamity. After her deception was laid bare, however, Ardbert refused to turn his blade on her and attacked the Ascians, unwittingly playing into their plans to bring about the Flood of Light. In the centuries that passed afterwards, she arranged for the Warrior of Darkness from the Source to hunt down the Cardinal Virtues, the sin eaters that took the bodies of her old friends, as a means to help redeem their name.