Due to the story's advancement and the fact some articles would otherwise be all white, There are Unmarked spoilers below, you have been warned. 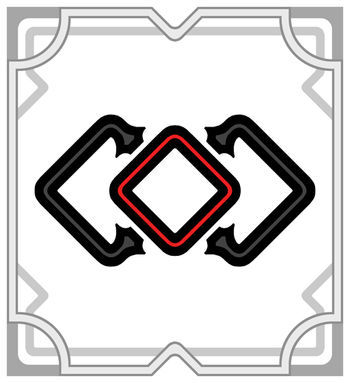 The ivory standard of Garlemald
An expansionist empire loosely patterned after the The Roman Empire. Founded by the brilliant Solus zos Galvus, the Garlean Empire are genetically unable to cast the simplest spells and compensated by becoming the creators and masters of Magitek technology, which they have used to conquer over a third of the known world. The nations that they conquer are assimilated into the Empire and their citizens drafted into the army, ensuring a consistently large (and loyal) military force. 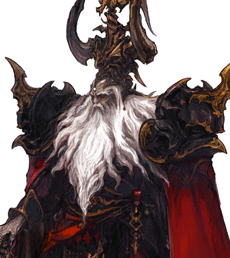 Click here to Solus as he appears in Patch 4. 4 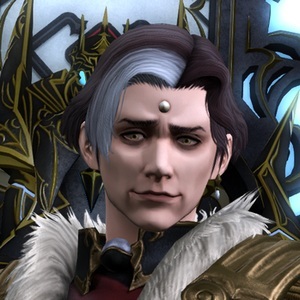 Race: Garlean
Discipline: N/A
"Tradition is the chain by which fools are bound."

"Now, my dearest grandson. Let me remind you of your place, in the simplest of terms. You do not make judgments ─ you administer them. Swiftly and to the letter. Naught else is your concern."

The first ruler of the Garlean Empire. Solus zos Galvus rose from humble beginnings to forge a empire through his military genius and charisma, and has maintained the position for eight decades. However, he has no heir or named successor to his position, and his advanced age is becoming a serious concern for the future of the Garleans. During the events surrounding Lady Iceheart and Shiva, his age catches up to him and he dies, leaving a power vacuum quickly filled by his grandson, who crowns himself the new emperor.
Second Emperor Varis zos Galvus 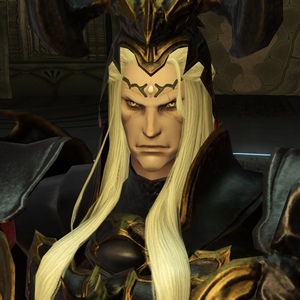 Race: Garlean
Discipline: Gladiator
"'Tis my solemn charge as Emperor to bring the eikons to heel. If this requires the extermination of certain elements, then so be it."

The new Emperor who succeeded his grandfather after a violent Succession Crisis. As the son of Solus's firstborn, he wrested the position by force from the expected heir, the Emperor's second son and his uncle. He seeks to finish where his grandfather and Gaius had left off and finish the invasion of Eorzea. He has a fairly significant presence in Heavensward, appearing during the main storyline to briefly confront the Warrior of Light alongside his trusted general Regula Van Hydrus. 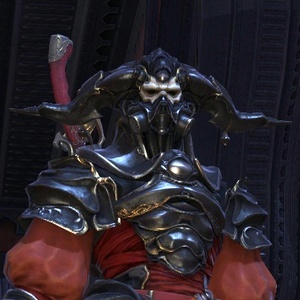 Race: Garlean
Epithet: The Black Wolf
Discipline: N/A
"He who cannot preserve the sovereignty of his nation is unfit to rule it."

The Legate of the XIVth Imperial Legion, and the commander in charge of the Garlean invasion of Eorzea. Gaius is a proud and powerful soldier who holds absolute belief in the ideals of the Garlean Empire. Believing that Eorzea is plagued with chaos and strife, he seeks to deliver the stability and absolute order that would come with Garlean rule.

For Tropes relating to Gaius in Stormblood and beyond, see "Shadowhunter" in the Allies page 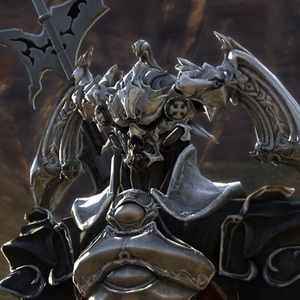 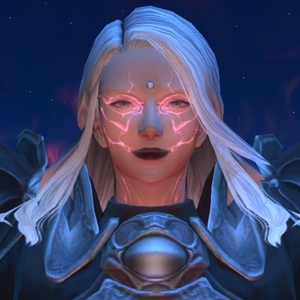 Race: Garlean
Epithet: The White Raven
Discipline: Lancer
"Opposition must needs be put down with fire and steel."

Legate of the VIIth Imperial Legion, and also known as "The White Raven". Nael is assigned the task of dealing with the Primals that have been judged a grave threat to the Garlean Empire. However, believing that Eorzea is beyond saving, Nael plots to use the power of "Project Meteor" to bring Dalamud down upon the continent, wiping out everyone and everything upon it.

As his plan continues, Nael's madness is catalysed by the dark presence lurking within Dalamud: the sealed primal Bahamut. Though Nael is defeated by the Warriors of Light, the victory comes too late: Dalamud is unleashed upon the world, heralding the Seventh Umbral Era. 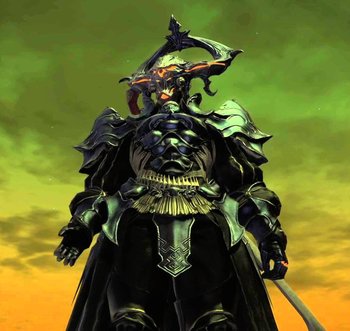 The Legate of the VIth Imperial Legion, the primary imperial force encountered throughout Heavensward. 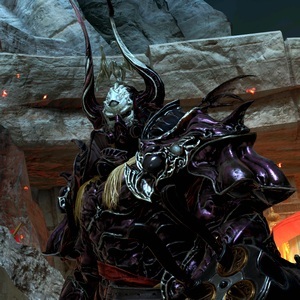 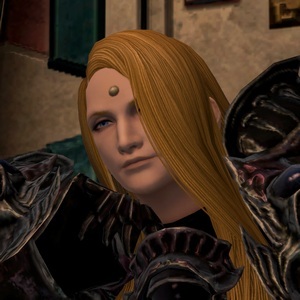 Race: Garlean
Discipline: Samurai
"Man should fight for the joy of it. To live, to eat, to breed— lesser beasts snap and howl at one another for this. Only man has the wisdom and the clarity to embrace violence for its own sake."

Son of Emperor Varis, Legatus of the XIIth Legion and Viceroy of the occupied Ala Mhigo in the wake of Gaius van Baelsar's death. 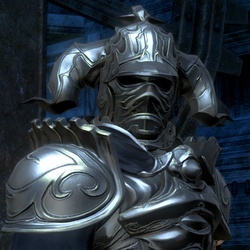 Race: Unknown, possibly Hyur
Discipline: N/A
"It appears our ancestors were as cunning as they were ruthless."

Legate of the IVth Imperial Legion, Gabranth led the invasion of Dalmasca 30 years prior to the events of Stormblood. 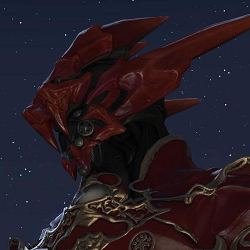 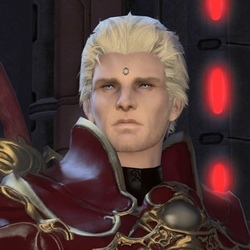 Race: Garlean
Discipline: N/A
"As long as my ambition burns, I shall strive to seize it."

A commander of the XIVth Imperial Legion, and second-in-command to Gaius. Nero is an ambitious and intelligent technician who has won great praise for his contributions to Magitek research and weapons development. However, he is only concerned with accumulating personal fame and power, and carries a dark grudge against Cid.

Following the main story, Nero sets his eyes on a power source within the Crystal Tower equal to, if not surpassing, the Ultima Weapon. To achieve this, he joins the Warrior of Light and Cid's efforts to defeat the remnants of the Allagan Empire within, informing them that there is naught but a noose waiting for him back in Garlemald following the XIVth legion going rogue. Once the Syrcus Tower is cleared, he is sucked into the World of Darkness with Doga and Unei, and until the Warrior of Light arrives, battles the monsters within to keep Doga and Unei safe. Despite the Cloud of Darkness' defeat, Nero's darkness-tainted wounds cause the last of his strength to give out during the escape and tells the Warrior of Light to leave him behind. It is only because of Doga and Unei's heroic sacrifice that Nero gets a second wind, and even then Cid has to pull him though at the last possible second. After this, Nero buries the hatchet with Cid...at least somewhat. 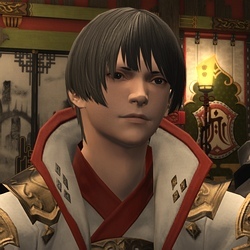 Race: Eastern Hyur
Discipline:Samurai
"Eikons are a blight upon this star. In his wisdom Emperor Varis wishes to explore the possibility of an alliance, to combat this common threat."

An imperial ambassador from Garlemald, he initially appears in the end of the 4.1 story eavesdropping on two Garleans talking about The death of Zenos or the active efforts to hide it from Garlean citizenry. Asahi makes his proper appearance in patch 4.2 Rise of a New Sun, acting on Varis' orders to determine if an alliance against Primals is possible with outside forces 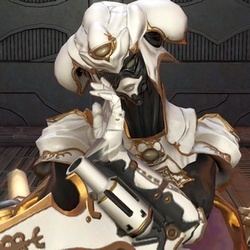 Race: Garlean
Discipline: Pugilist
"His dreams and ambitions, his body and soul—they are mine, do you hear me!? All mine!"

A commander of the XIVth Imperial Legion. Livia is a war orphan who was adopted and raised by Gaius, later joining the military to repay him. She is a capable and efficient soldier who will push herself past any limit if it will serve the needs of her beloved adoptive father. 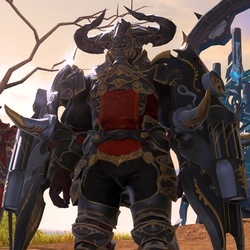 Race: Roegadyn
Discipline: N/A
"I am not wont to bare my steel needlessly. But if you are deaf to reason..."

A commander of the XIVth Imperial Legion. As a former mercenary whose homeland was subjugated by the Empire, Rhitahtyn serves as a shining example of how Garlean meritocracy can promote anyone with appropriate skill to a high-ranking and respectable position. As Gaius was the one who recognized his ability and appointed him to his current position in spite of his race, Rhitahtyn is very loyal to both his commanding Legate and the ideals of the Garlean Empire. 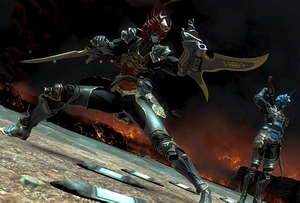 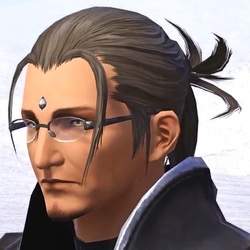 Race: Garlean
Epithet: Maxima the Neoteric
Discipline: Gladiator
A Garlean pilus who is part of the Populares faction, Garleans who oppose the warmongering ways of their nation.
Grynewaht pyr Arvina 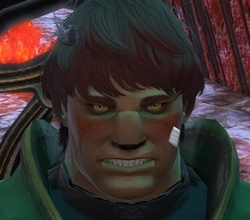 Race: Hellsguard Roegadyn
Discipline: N/A
"Bwahahahaha! It's like all my namedays have come at once!"

A field captain who appeared at the Carteneau Flats in 3.56 to stop the Scions from accessing Omega Weapon. He also knows about Cid Garlond who had defected from the empire. 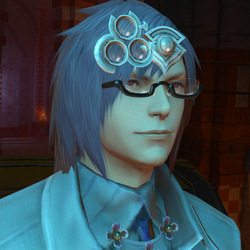 Race: Garlean
Discipline: N/A
"It was with magitek that we grew strong ─ that our nation became an empire. Yet ultimately, this was an extrinsic solution to an intrinsic problem."

A Garlean scientist working for Zenos. He is researching ways to imbue his people with the ability to cast magic, and more.

Long ago, Gaius van Baelsar adopted five auri orphans, who joined the Imperial army to follow in their surrogate father's example. Many years later, these same orphans — now grown men and women — are the chosen pilots for the new Weapon Project. In 5.2, Milisandia, one of the children Gaius raised, manned the experimental Ruby Weapon to lay siege to the Alliance army in Gyr Abania.

Father of Cid Garlond, Midas nan Garlod was a brilliant magitechnician whose weapons revolutionised the Garlean war machine, leading to him being appointed chief engineer. However, he is most often known as the man who spearheaded the original attempt at the Meteor project, and became associated with the situation that lead to his death, the Bozja Incident. Attempting to commune with the moon Dalamud, Midas summoned a spectacular overload of energy, destroying both the transmission tower he was using, and the surrounding city of Bozja. Much like Nael van Darnus later who attempted the same course with greater success, this incident tainted the memory of Midas as a genocidal lunatic who was toying with powers far beyond his understand. 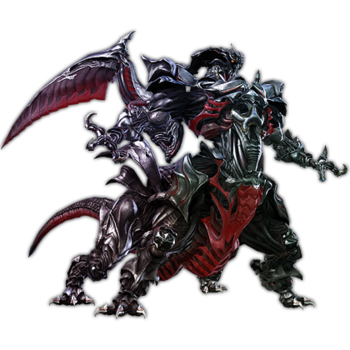 An ancient Allagan superweapon that was unearthed by the Garlean Empire and piloted by Gaius van Baelsar.
Arch Ultima
A new, protype version of the Ultima Weapon, fought by Estinien Wyrmblood in the 5.1 patch.
The Ruby Weapon 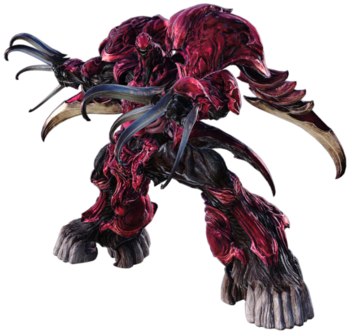 Mark III Anti-Eikon Warmachina
A prototype anti-Eikon warmachina reverse-engineered from the Ultima Weapon by the remnants of the VIIth Imperial Legion. It is the first of several such prototypes to be deployed against the Eorzean Alliance, serving as the boss of the Cinder Drift trial, and the first of Shadowbringers's Weapon storyline.