Disciples of the Hand 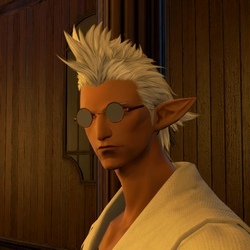 Race: Wildwood Elezen
Discipline: Carpenter
"You must be the wood."

An Elezen male who is the Guildmaster of the Carpenters' Guild in Gridania. Well respected, and friendly to most people. 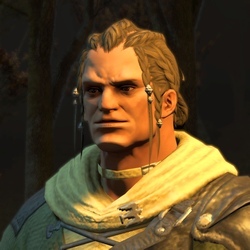 An intense and emotional captain in the Order of the Twin Adder who has a long history with Beatin.

An archer living in the Brume of Ishgard who wants the Warrior of Light to make a bow worthy of killing dragons to restore his family's honor. 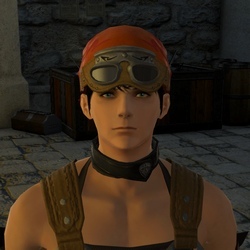 A Midlander Hyur male and guildmaster of the Blacksmiths' Guild. Skilled in his art, but unfortunately, known to be a heavy drinker and frequent visitor to Limsa Lominsa's Drowning Wench. 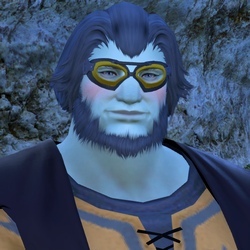 A Roegadyn merchant who buys the guild's goods, and sells them in the other city-states. He is most often known for frequenting Ul'dah, and showering gifts of fine weaponry to female gladiators.
Baroness Laurisse de Jervaint
Race: Wildwood Elezen
Discipline: Paladin
A young Elezen woman in Ishgard who is the last living member of a noble but impoverished bloodline. She seeks to become a Temple Knight in order to restore her family's fortunes and honor.
Sekka
A Midlander Hyur from Hingashi, who traveled to Limsa Lominsa to learn blacksmithing after constant rejection from her swordsmith father. 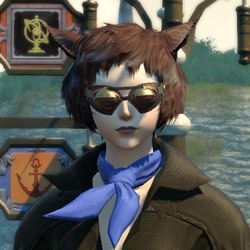 Race: Seeker of the Sun Miqo'te
Discipline: Armorer
"I see it as my Builder-given duty to not only pass on the techniques of the armorer to the next generation of artisans, but to improve on those processes as well."

A female Miqo'te and guildmaster of the Armorers' Guild. Cares a lot for her students and is willing to share everything about the trade. 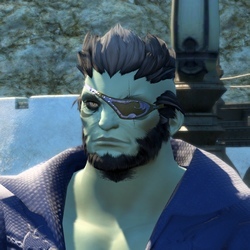 Race: Seawolf Roegadyn
Discipline: Armorer
A Roegadyn and fellow Armorer, however his philosophy about armory and opinions about the guildmates puts him at odds with H'naanza. 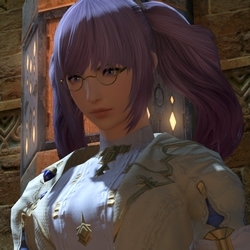 Race: Midlander Hyur
Discipline: Goldsmith
''"Smelting, casting, cutting, polishing— we use all these techniques to craft beautiful baubles that delight the eyes."

The recently-appointed Guildmaster of the Goldsmiths' Guild. She's a little eccentric, but nonetheless talented at her craft. 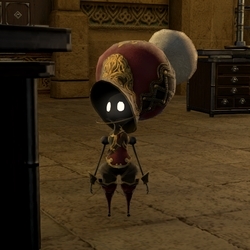 "I sAy We gIvE hIm tHe gIfT tHaT kEePs oN gIvInG! i sAy wE gIvE hIm tHe gIfT oF fIrE!"
Serendipity's assistant. Having attended to the masters of the Goldsmiths' Guild for generations, this Mammet is not afraid to comment on a fledgling goldsmith's skills (or lack thereof).
The Crown Gemworks
Race: Highlander Hyur (Emeloth, Wido, Hal),
Seeker of the Sun Miqo'te (J'khebica), Ananta (Kanchana)
Discipline: Goldsmith
The focus of the Stormblood questline, the Crown Gemworks is a newly-established artisans' school founded and funded by Sultana Nanamo in order to stimulate the newly-liberated Ala Mhigo's economy. The Gemworks consists of Emeloth, Kanchana, J'khebica, Wido, and Hal, with the Warrior of Light serving as a schoolmaster to teach the latter three.
Colbernoux
Race: Wildwood Elezen
Discipline: Goldsmith
A longtime member of the Goldsmith's Guild and minor aid in the Heavensward questline, where the player attempts to accomplish a very similar commission to what he had once theorized years prior. 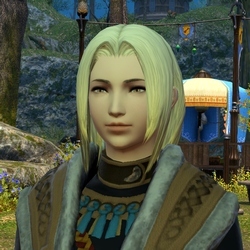 Race: Midlander Hyur
Discipline: Leatherworker
"The very thought of some two-gil hide mangler claiming to represent this guild makes me want to... Gaaah!"

The Guildmaster of the Leatherworkers' Guild, and Fen-Yll Fineries. A strict, no-nonsense woman, famed for threatening to flay the skin of those who waste her time, and use it as leather.

The owner of Angrbotha Apparel and Accoutrements, Fen-Yll Fineries' competition.

A naturalist and co-author of New Eorzean Geographic, who has temporarily put aside her publications to share her knowledge via taxidermy and preservation. Mildly arrogant of her status, but nonetheless passionate to her field of study.

Redolent Rose
Race: Hellsguard Roegadyn
Discipline: Weaver
"I shall be blunt— weaving is an art, and, like all true artists, we must make sacrifices and suffer for our craft."

A Hellsguard Roegadyn and Guildmaster of the Weavers' Guild. A man of high fashion, his exacting standards ensure that the guild's customers receive only the finest clothing. Is totally not Masked Rose in the Gold Saucer. Nope.

Wawarukka
Race: Dunesfolk Lalafell
Discipline: Miner
A Dunesfolk Lalafell and Miner, he has his eyes set on a rich girl. However, his prominent quirks prove to be detrimental to his dating plans.
Kokomo
A Jeweler's daughter and Lalafell, she is the girl that Wawarukka aims to impress. She has a strict father who is less than amused with Wawarukka's "style".
Mamajaru
A Lalafell and one of Kokomo's suitors.
Averil
Race: Midlander Hyur
Discipline: Weaver
A weaver and student of the craft to the Warrior of Light throughout Heavensward. 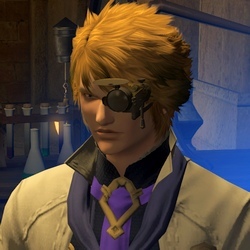 Race: Midlander Hyur
Discipline: Alchemist
"Remember: the world is our crucible, and an alchemist makes marvels of the mundane!"

Guildmaster of the Alchemists' Guild, he toils in his lab day and night, working towards a hidden goal... 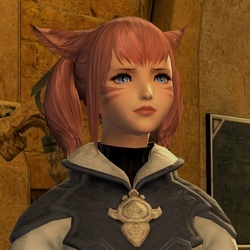 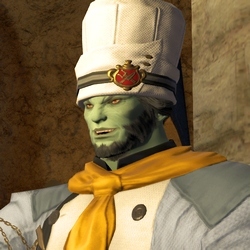 Race: Sea Wolf Roegadyn
Discipline: Culinarian
"Our trade's as tough as old mutton, an' passion's the only thing what gets us through the gristly bits."

A Roegadyn and guildmaster of the Culinarians' Guild. Head chef of Limsa Lominsa's famous Bismarck restaurant.

Melkoko
Waitress of the Missing Member. She's none too fond of the tavern's head chef, requesting the player to enter the upcoming Dellemont d'Or, a prestigious cooking competition, and put him in his place.

Iola
Race: Hume
Discipline: Blacksmith
Owner of the Iron Bellows forge, currently undergoing hard times from lack of clients. After trading her father's ring as collateral to a moneylender, her goal is to make enough money to buy it back.
Nee Marn
Race: Nu Mou
Seeking out clients in Il Mheg, Iola and the Warrior of Light strike a deal with the Nu Mou,

Facets of Nourishing (Alchemist and Culinarian)

Bethric
Race: Galdjent
Discipline: Alchemist
An amaro veterinarian and overseer of the Facet of Nourishing.
Skip
Race: Amaro
A wild amaro who was brought into the Crystarium after narrowly escaping a pair of poachers after being poisoned.