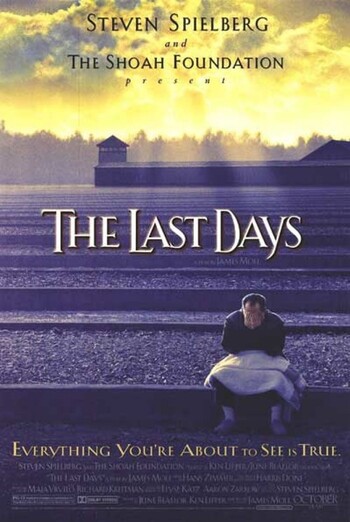 The Last Days is a 1998 film directed by James Moll.

It is a documentary about The Holocaust, and specifically the Holocaust in Hungary. For most of World War II Hungary was a nation allied to Germany but still independent, and as a consequence Germany did not occupy Hungary until the spring of 1944. As a result the over 800,000 Jews of Hungary, who until that point had been mostly safe, suddenly found themselves in the grip of the Nazis. The Nazis then proceeded to do their utmost to exterminate Hungarian Jewry, working at breakneck speed even as the war was rapidly turning against them, eventually murdering better than half of the Jews of Hungary.

The film interviews seven Hungarian Jews, who recount their experiences as the Nazis descended on them with terrifying speed. All lost most or all of their families. Five of the six return to Europe and visit their old homes, as well as the concentration camps of Auschwitz and Dachau.