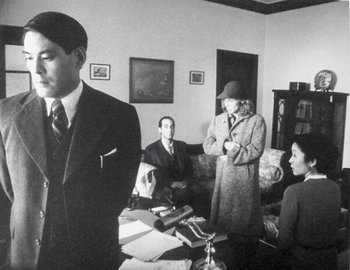 Visas and Virtue is a 1997 short film (26 minutes) directed by Chris Tashima.

It is the story of Chiune Sugihara

, a Japanese diplomat who became vice-consul of the Japanese embassy in Kaunas, Lithuania in 1939. As the film opens it is 1940, Lithuania has already been gobbled up by the Soviet Union, and Jewish refugees from Poland are looking for a way out. Sugihara (played by Tashima) has been busy violating his embassy's guidelines by issuing Japanese transit visas to every single Jewish refugee who comes to his office, regardless of whether or not they have visas to destinations beyond Japan (they don't). Refugees with transit visas are free to take the Trans-Siberian Railway to Vladivostok and on to Japan, when otherwise they'd have to return to Poland and become victims of the Nazis.

However, as the film opens Sugihara has received a telegram from Tokyo telling him in no uncertain terms to stop handing out transit visas. He is caught in a dilemma, unsure whether to obey orders or follow the dictates of his conscience, thus risking his career and the fortunes of his wife and three children.

In Real Life Sugihara, who has been called "the Japanese Schindler", is thought to have saved the lives of some 6,000 Polish Jews. (Quite a few more than Oskar Schindler did, actually.)