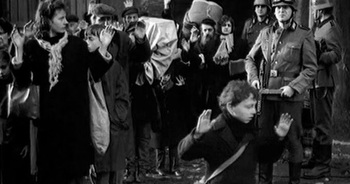 It is inspired by the iconic "Warsaw Ghetto Boy

" picture, taken by an unknown member of the SS in 1943. The original photo, part of the infamous "Stroop Report

. The photo centers around a boy of perhaps six, being marched down a street at the head of a group of survivors, with his hands up. An SS trooper in the background is pointing a gun at the boy.

There is no live-action footage of the ghetto uprising, but this film portrays the photo as a still from film footage. As a cameraman turns the crank on a tripod film camera, a terrified boy is marched down the street. Fate takes a hand, however, when a gust of wind blows off the boy's hat.