This Is a Drill 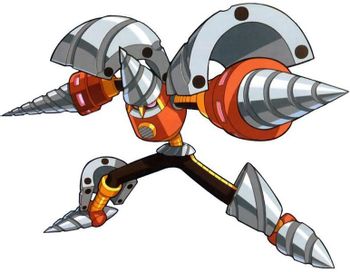 Screw it, you know the drill.
"We evolve beyond the person we were a minute before! Little by little, we advance a bit further with each turn. That's how a drill works!!"
— Simon, Tengen Toppa Gurren Lagann
Advertisement:

Chainsaws aren't the only power tools to be used as weapons in TV Land, and weaponized drills are a staple of the Super Robot Genre almost as ubiquitous as the Rocket Punch.

Perhaps it's because they're actually fairly effective against heavily-armoured targets, or perhaps the male gender finds an inherent appeal in the idea of "penetration", may or may not combine with Pile Bunker to emphasize the idea and increase the range. It also puts one in mind of a "spinning" chainsaw, which of course, is spectacular.

For whatever reason, huge conical mining drills are much more popular than the boring power tool kind. Such drills are also occasionally used closer to their Real Life context, which is tunnelling.

Alas, in Real Life, drill weapons are a perfect example of Awesome, but Impractical. In order for a drill to penetrate any hard object, it must be as close to perpendicular to the surface as possible, the surface cannot be curved, and the object must be stationary, otherwise the drill will just skip right along without digging in, which many contestants on Robot Wars have discovered to their chagrin.

This is a Weapon of Choice trope, though it does see action as an Improvised Weapon. You know the drill. A subtrope of Spectacular Spinning. Often found on the business end of a Drill Tank or Drill Mole.

Not to be confused with This Is Not a Drill, because it is. Bavarian Fire Drill is not an overly specific example of this trope. Neither is Drill Sergeant Nasty, although again, a nasty sergeant armed with a drill would be cool and badass. Usually unrelated to Drill Hair, unless Prehensile Hair is in play. And if you still want to dig and kick ass with one tool, but lack the budget, you can always choose the Powerful Pick or the Shovel Strike instead.

Henry summons a drill to attempt to break down the door.

Henry summons a drill to attempt to break down the door.