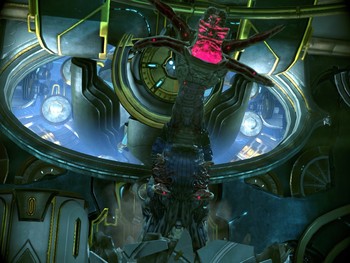 This used to be a normal Corpus Mook.
Advertisement:

For a game about space ninjas, there sure are a large amount of scares to be had in here. And when we say scares, boy do we mean scares...

open/close all folders
The Infestation
The Grineer
Advertisement:
The Corpus

The Sentients
The Tenno
The Orokin
The New War
The New War. From the pre-release previews to what was shown at Tennocon 2021 made it clear the quest was going to be horrific. And even that couldn't show how insane the full release was.
Advertisement:
Everything else