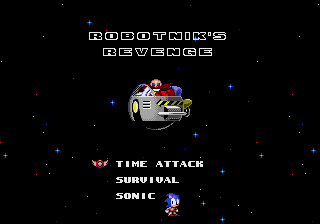 Robotnik's Revenge is a ROM hack of Sonic the Hedgehog 2 by Colinc10. Instead of replacing the levels from the original game, it instead takes the final level and extends it greatly, adding all 17 bosses from Sonic 1 and 2 into one giant boss run.

There are two modes in the game: Time Attack, which gives Sonic infinite lives, has rings within the level, and gives you a grade based on your time, and Survival, which gives Sonic 3 lives, no rings, and simply sees how long you can hold out. Players can also choose between Sonic and Tails, though the difference is minimal.

The game was very well-received at the Sonic Hacking Contest, and even had a trophy named after it.