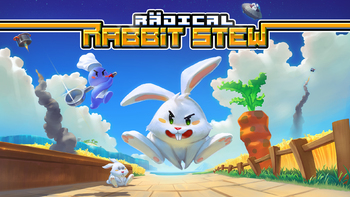 Radical Rabbit Stew is an action-puzzle game developed by Pugstorm, and published by Sold Out. It was released for PC and Nintendo Switch on 16 Jul, 2020.

You play as the cleaning boy, the last employee of the Legendary Space Diner after the Rabbit Queen, jealous because her kingdom had only uncooked vegetables to eat, sacked the place and kidnapped all the chefs. Armed with an assortment of discarded spoons, it's your duty to travel across different planetoids, knock all the rabbit minions you find into cooking pots, and rescue everyone!