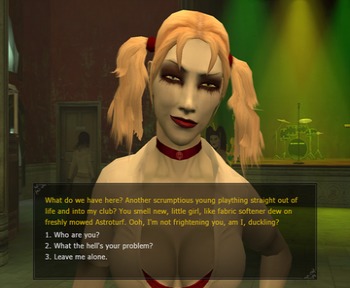 “She loves the dead.”
"I heard that he was into field hockey players."
— Malkavian PC to Damsel about LaCroix, After the PC agrees to spy on him.
Advertisement:

In a game about vampires, this was more or less inevitable.

Thanks to several patches, heterosexual romantic dialogues (like Damsel's) and sexual encounters (like Romero's) are available for Playable Characters regardless of gender. So they also count as examples on this page. Edit accordingly.

Depending on the player, the PC's relationship with LaCroix can come across as FoeYay or make the character look like he's perilously in love with LaCroix. Ming Xiao's tendency to refer to him as "your Prince" certainly doesn't dissuade this idea either.

Malkavian PC: You point and I jump.

The Tremere PC may or may not have a crush on Strauss by the time Strauss gives him a room at the Chantry. And considering that the Tremere clan usually prefer to embrace men...

Tremere PC: (after being thanked for helping Strauss out) Like I said, my interests lie with the clan...

The first thing she does when she meets the PC is hit on her, regardless of Clan. Every encounter with her afterwards involves Jeannette flirting with the PC, who only needs one point in Seduction to flirt back. And at the end of her quest line, she can have an Optional Sexual Encounter with Jeanette, making this about as obvious as it gets.

Choose the right dialogue options and complete her quests in the right way and V.V. will fall head-over-heels in love with the player character of either gender, to the point of emailing you bad poetry she wrote about you.

They get special dialogue when the female PC hires them, remarking that they usually don't do women but she looks good enough for them to make an exception.

The PC's ghoul is very obsessed with the PC, to the point of literally dropping everything else from her life and moving in with her. She calls her "Master", begs to be allowed to please her, and seeks her approval in everything. When you add how the PC can call her things like "my pet", and how blood-sucking and sexual imagery go hand-in-hand in this game, Heather starts looking less like a ghoul and more like a Sex Slave...

The girls a PC can talk to in any of the nightclubs can be seduced by a non-Nosferatu female PC, provided she has high enough seduction and makes the right dialogue options.

One way to get him to write a bad review of the restaurant LaCroix is hoping to buy is through seduction, which is available to both male and female PCs with the patch.

While she will not respond to a female PC flirting with her, her tendency to stutter in front of a PC with high seduction (and therefore, a potentially very good-looking PC) happens regardless of gender. Doubles as a bit of a fridge Tearjerker, as the Giovannis are quite homophobic, and thus it leaves you with the implication that she represses her own bisexuality because of her family's beliefs.
Non-Playable Character/Non-Playable Character
Though the relationships between the Non-Playable Characters are not quite developed, there's still material for those who dare to look.

Isaac and Ash's relationship borderlines between this and very intentional Homoerotic Subtext.

Pisha acknowledges having a female lover when she was still alive...in the 1700s. She also takes her name since she doesn't tell anyone her true name.

Similar to how NPC prostitutes will react to a female PC hiring them, Hannah mentions being strongly attracted to Jezebel even though she's "not usually in to women", to the point where she accepted her as a client when she usually wouldn't have. Of course, in context this just makes the fact that Jezebel seduced Hannah in order to further the spread of disease even more tragic...