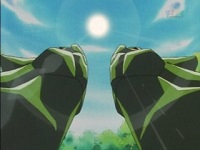 Harden! Now Harden some more! Maximum hardness, Metapod!
"No, it wasn't Samurai's fault. It was my fault. If I was a better Pokémon trainer I'd stop making all these excuses. From now on I swear I'll never run away and leave my friends behind again. No more excuses."
— Ash

Ash begins this episode by trying to capture a Weedle, only to be interrupted by a boy in samurai armor challenging him to a Pokémon battle. Ash sends his Pidgeotto out against the boy's Pinsir, but despite having the type advantage Pidgeotto loses. Ash then claims victory over Pinsir by sending out his newly evolved Metapod, who's hardened carapace breaks Pinsir's pincers. After that the boy sends out his own Metapod and they both continue to battle fruitlessly, ordering their Pokémon to use the Harden move over and over again.

The battle is eventually interrupted by a swarm of Beedril, one of which takes Ash's Metapod away. The next day Ash attempts to retrieve Metapod, only to run into trouble when he discovers Metapod no longer trusts him. Ash apologizes for his mistake, and promises to take better care of Metapod in the future, and Metapod then evolves to protect him from an incoming swarm of Beedrill. The newly evolved Butterfree puts all the attacking Pokémon to sleep with his Sleep Powder attack, and Ash and Misty make it through Viridian and on towards Pewter City.