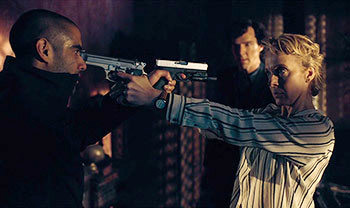 "I've never made a vow in my life and after tonight, I never will again, so, here in front of you all – my first, and last, vow. Mary and John – whatever it takes, whatever happens, from now on, I swear I will always be there. Always."
— Sherlock Holmes, "The Sign of Three". Unfortunately for Sherlock, Not only will he not be able to keep his promise, he will learn the hard way that sometimes, there is simply no avoiding the inevitable...
Advertisement:

Whilst the Watsons are delighted with their newborn, Sherlock believes, after hearing a recorded message from Moriarty, that his supposedly dead adversary has a posthumous plan to attack him. When Lestrade calls him in to solve the mysterious death of cabinet minister David Welsborough's son, Sherlock is intrigued that a bust of ex-premier Margaret Thatcher has been broken and further incidents follow in which busts of Thatcher are destroyed, one involving murder. Sherlock deduces that a priceless jewel was hidden in one of them to smuggle it into England but, when he lays a trap for the thief, he is amazed to learn who is also innocently involved. Somebody whom he must attempt to save from a vengeful associate from a failed operation six years earlier.