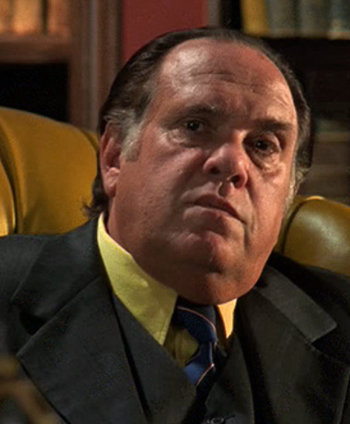 Maury Alan Chaykin (July 27, 1949 – July 27, 2010) was a versatile and talented American-Canadian character actor with a knack for playing blustery, aggressive, and often comic characters. He would be recognized by most US audiences by face and voice even if not be name. He was in everything from WarGames, Twins, Dances with Wolves, My Cousin Vinny, and MouseHunt. He was a regular of director Atom Egoyan; showing up in The Adjuster, Montreal Stories, Exotica, and The Sweet Hereafter. Probably his most famous role was as Nero Wolfe in A Nero Wolfe Mystery, a role that earned him an ACTRA Award nomination. He also won a Genie Award (of three total nominations) for Whale Music, playing a washed-up former rockstar holed up in a secluded mansion.

He was born in Brooklyn, his father an American, his mother a Canadian, and throughout his life he maintained a dual citizenship. He studied acting at the State University of New York in Buffalo, where he founded the avant-garde Swamp Fox Theater Group, appearing uninvited at the Festival of Underground Theatre in Toronto, making a strong impression on the festival's artistic director. In 1974, when Chaykin was a struggling young actor working off-Broadway, Gass invited him to Toronto to help create Hurray for Johnny Canuck, his stage adaptation of the wartime comic book. Chaykin's performance in the play led to job offers from both sides of the border, and he was invited to perform in the New York Shakespeare Festival's Public Theater production of Leave It to Beaver Is Dead with Mandy Patinkin and Dianne Wiest. He quickly became one of Canada's most respected and versatile character actors, accruing a total of 120 film and TV credits.