Literature / Over My Dead Body 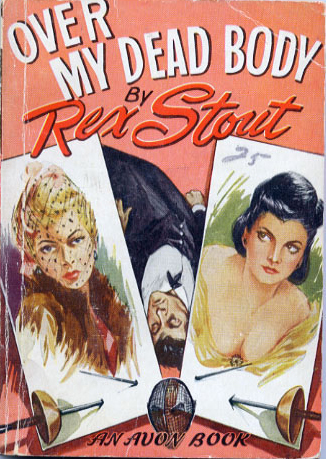 A 1940 mystery novel by Rex Stout, and seventh in the Nero Wolfe series.

Nero Wolfe's bank balance is looking pretty healthy for once, so he's not looking for work. And he's definitely not looking for work from Carla Lovchen, an imperious young fencing instructor and illegal immigrant from Montenegro, who wants Wolfe to clear her friend of a wrongful accusation of theft. But things get complicated when Carla's friend — Neya Tormic, a fellow instructor and immigrant — claims to be Wolfe's long-lost daughter, whom he adopted but lost contact with during the political chaos following World War One. The threat of scandal would be enough to prompt Wolfe into action, but during her visit Carla also secreted a letter inside one of Wolfe's books, concerning mysterious negotiations over Yugoslavian forestry rights. This leads Wolfe and Archie Goodwin into a tangled affair of political intrigue, greedy bankers, ruthless agents and, of course, murder...

A Nero Wolfe Mystery adapted Over My Dead Body in two parts as its Season 1 finale.