Literature / And Be A Villain 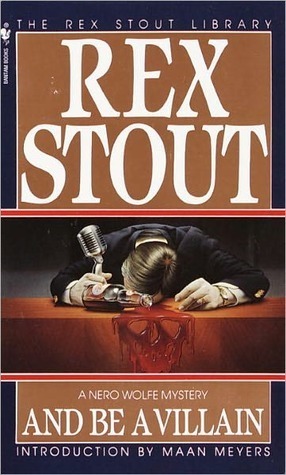 A popular radio program hosted by charismatic interviewer Madeline Fraser is facing a public relations crisis. During a live commercial tasting for a popular brand of soft drink, one of the guests — Cyril Orchard, publisher of a weekly horse racing magazine — has been murdered with poison in his glass. As this happens to coincide with Nero Wolfe's hefty tax bill, he reluctantly spies the opportunity to earn some money, and persuades the show's producers and sponsors to hire his services to catch the culprit and end their difficulties for a generous fee. But the matter is more complicated than Wolfe and Archie Goodwin anticipate, because behind the show's cheerful exterior there are many secrets that the show's cast and crew are determined to keep, even more so when it looks like Fraser may have been the murderer's real target. And then another murder reveals another possible motive, and another possible actor at play — a shadowy, ruthless mastermind of the New York criminal underworld, who has no intention of allowing Nero Wolfe to unravel his devious schemes and will do whatever it takes to prevent it...

The novel is the first in the "Zeck" trilogy, in which Nero Wolfe matches wits with the mysterious criminal mastermind Arnold Zeck.