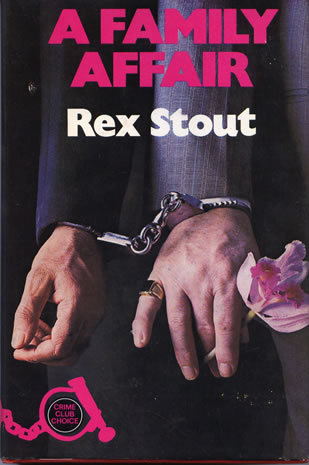 The final novel in Rex Stout's series of Nero Wolfe mysteries, published in 1975 (six months before the author's death at the age of 88). It is set in October 1974, and takes place in the aftermath of President Richard Nixon's resignation over the Watergate affair.

Not to be confused with Family Affair, the American sitcom that ran from 1966 to 1971.

Late one night, the brownstone receives an unexpected visitor — Pierre Ducos, Nero Wolfe's favourite waiter at Rusterman's, the restaurant once owned by his late best friend. He claims that someone is trying to kill him and begs to consult with Wolfe, but when Archie Goodwin puts him in a spare bedroom for the evening, he is killed by an explosive device that has been concealed in his jacket pocket. Infuriated at a murderer striking within the confines of his home, Wolfe resolves to find the killer before the police, and discovers that Pierre's death may be connected to the murder of Harvey Bassett, an electronics expert and inventor who had dined at Rusterman's with friends weeks before his death. Bassett was obsessed with the Watergate scandal and was planning to sue the disgraced Richard Nixon over it, raising the possibility that he was murdered by shadowy players in that drama. But as the body count rises, the authorities draw closer and Wolfe's stubbornness increasingly raises the possibility of his and Archie's disgrace, it become apparent that the truth may be found closer to home...