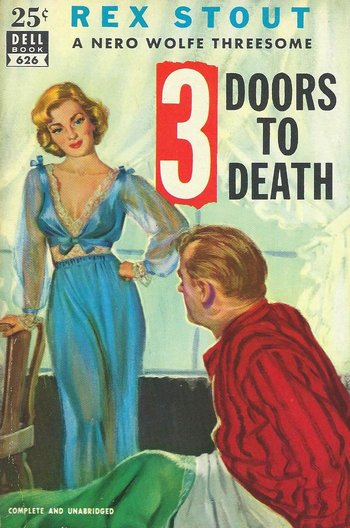 "Man Alive" opens with clothing designer and model Cynthia Nieder hiring Wolfe to investigate why she saw her uncle Paul alive at one of her fashion shows, when Paul committed suicide a year before. While Archie fails to see Paul at the next show, Cynthia does shortly afterward - dead in his office, struck on the head and stabbed repeatedly in the face with a window pole. Investigation of the Daumery & Nieder firm reveals that Paul is not the only recently-deceased founder of the firm, as Jean Daumery fell off a fishing boat weeks before, while it is unclear if or how anyone knew that Paul Nieder was actually alive. It takes forgery and coercion for Wolfe to reveal the murderer's location and unmask the culprit.

"Omit Flowers" sees Marko Vukcic request a favor from Wolfe: Virgil Pompa, a chef who traded in his integrity to work for the restaurant chain AMBROSIA, has been arrested for stabbing new AMBROSIA head Floyd Britten to death, and Vukcic knows Pompa would not stab a man In the Back. Using the name of Britten's mistress Julie Irving to gain access to the Britten household, Archie finds Britten's wife near death from a stab wound and has her brought to the brownstone. With a family willing to lie for each other, Wolfe must find the truth behind obfuscation to clear a man who was once a great chef.

Finally, in "Door to Death," Wolfe travels to Westchester County in an attempt to hire Andy Krasicki, gardener for the household of Joseph Pitcairn, as a replacement for the absent Theodore Horstmann. While they find Krasicki, they also find Dini Lauer, Krasicki's newly betrothed, gassed to death in the greenhouse. When the uncooperative Westchester police lock in on Krasicki as the murderer and take him away, Wolfe's desperation for a gardener leads him, Archie, and Saul on a hike through the woods behind the Pitcairn estate in an attempt to steal a confession out of the uncooperative Pitcairns.

A Nero Wolfe Mystery adapted "Door to Death" during its first season.