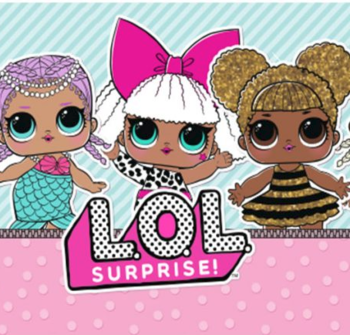 Three of the franchise's characters: Merbaby, Diva and Queen Bee.
"In a world where babies run everything, little rockers rebel against nap time and Teacher's Pets become class presidents with 'Free Pizza Fridays!' In this world, all work is play and nothing is dull because it's all a lil' surprising and outrageous!"
— MGA's official description of the franchise
Advertisement:

L.O.L. Surprise! is a doll line by MGA Entertainment that is based on the unboxing trend on online video sites that debuted in December of 2016. Each doll comes with 7 or more layers of surprises hidden inside each product, with the doll itself having an additional water surprise. All of the characters except for the pets are depicted as babies and toddlers. Each doll is grouped into a certain club (four of these are the Glee Club, Athletic Club, Storybook Club and Glitterati, the latter of which is reserved for rare, glitter-covered dolls). As of February 2016, there are 5 different series of the dolls, with at least 2 different series being released every year. Beginning with Series 3, the series were named after a special gimmick (Confetti Pop for the ball being themed after a confetti ball for Series 3, Eye Spy for the secret messages hidden within the Season 4 products, and Makeover Series for Season 5's dolls, which have real hair). The brand has quickly become of the top-selling toys in the United States.

A special based on the line, Winter Disco, premiered on Amazon Prime, Google Play and iTunes in 2019, followed by an All-CGI Cartoon Movie on Netflix during Fall 2021.