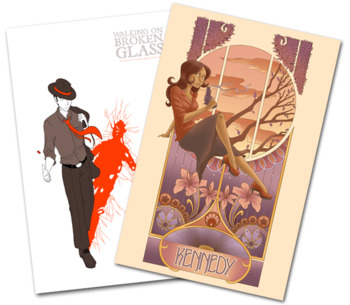 is a now defunct webcomic created by Grey Ink Studios, which was comprised of Samantha Mathis and Caytlin Vilbrandt.

Walking On Broken Glass has been described as "A Supernatural Office Dramedy Romance about Murder". Which, while maybe not specifically accurate, does display the wide array of topics and ideas this comic embodies. It’s about a man dealing with a dark fate looming over his future, and his quest to make up for the wrongs of that future in the present. It’s about a woman with enough strength, determination, love and stubbornness to stand by his side through thick and thin. It’s about monsters. It’s about magic. It’s about werewolves! And witches! And vampires! (Oh my?)

Unfortunately, as of 2014, the comic has been discontinued due to undisclosed personal reasons. The comic's domain expired some time after.

This doesn't mean you can't try the Wayback Machine, though, but most (if not all) of the comic does not display in there, meaning that currently, the only way to obtain it is through Gumroad

, where you can download the first three chapters of the comic either for free or for whatever price you find fair, and the following two chapters by paying at least 2 Dollars.