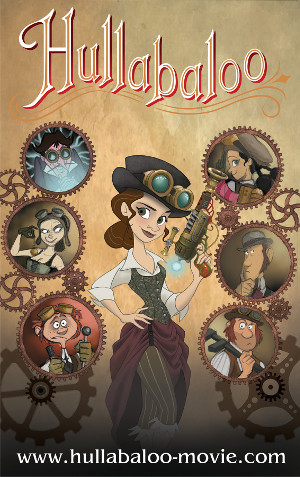 Hullabaloo is a series of hand-drawn animated short films currently in production. They're set in a Steampunk world occupied by the young inventor Veronica Daring, who comes home from her elite finishing school to find a nasty situation: her father has been kidnapped, and his captors plan to use his inventing genius for evil corporate ends. Daring tracks her father to the abandoned amusement Daring Adventures, where he used to test his inventions. There she meets a fellow inventor girl named Jules Fletcher, and they join forces to take down the villains. But the bad guys' wealth and influence are great, too much to let them be challenged directly. But an alias should provide them cover, so Veronica takes on the secret identity "Hullabaloo", a goggled hero who pledges to use technology for good and uses science to take down evil.

The Hullabaloo shorts represents an effort by Disney veteran animators to preserve the art of hand drawn animation. Their goal is to reignite public interest in traditional animation again, which has long fallen wayside during the past decade while computer generated animation has dominated. Each of the artists have worked on Disney and Dreamworks Animation films such as Tarzan, The Lion King (1994), The Emperor's New Groove, Kung Fu Panda, The Incredibles, and Frozen. Their biggest hope is that Hullabaloo is approved for adapting in a feature-length film, and that through it hand drawn animation can have a place in the film industry again.

There are four shorts currently planned: The Great Race, Curse of the Cheshire Cat, The Mysterious Island, and Ask The Professor. Their campaign for funding started on August 27, 2014 on Indiegogo and ended on October 2nd funded to more than 500 percent of their original $80,000 goal. You can view their (closed) Indiegogo campaign HERE

, check out their animation tests on their YouTube channel HERE

Not to be confused with the ABC pop music show from The '60s.

Tropes found in Hullabaloo include: