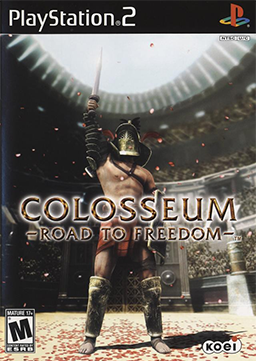 Colosseum: Road to Freedom is a video game released for the Playstation 2 in 2005. It was developed by Goshow and produced by Koei. It puts the player in the shoes of a slave and gladiator (whose name and origins are determined by the player), and contains Action/RPG elements. While the game's focus is on earning the favor of the crowd to eventually become free, the Protagonist will become entangled in a scheme which has major implications on who will rule Rome.

It has a remixed version called Gladiator: Road to Freedom Remix, which added extra content for Japanese players only and it has a prequel for the Playstation Portable called Gladiator Begins released in 2010.