Film / Nine Days of One Year 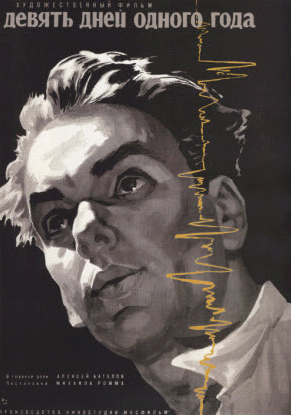 Nine Days of One Year (also known as Nine Days in One Year) (Russian: Девять дней одного года) is a 1962 film from the Soviet Union, directed by Mikhail Romm, starring Alexsey Batalov. Batalov is Dmitri "Mitya" Gusev, a physicist working at a Soviet nuclear physics research facility. Lyolya, his old girlfriend and fellow physicist, has gotten engaged to Ilya, because Gusev has been neglecting her. However, when she finds out that Gusev is continuing with his research despite having been exposed to 200 roentgen of radiation, and against his doctor's advice that another exposure could kill him, Lyolya realizes she still loves Gusev and marries him instead. They settle into an uneasy domesticity at the research facility, while Gusev continues his work at risk to his health. The movie dramatizes nine non-consecutive days over the course of a single year in Gusev and Lyolya's lives.

Nine Days of One Year is one of the most famous cultural products of the "Khruschev Thaw", the period when Nikita Khruschev's reforms liberalized life in the Soviet Union after decades of absolute repression under Josef Stalin. Its skeptical take on scientific progress is especially notable in an era where the Soviets were celebrating achievements like Sputnik and Yuri Gagarin orbiting the earth.