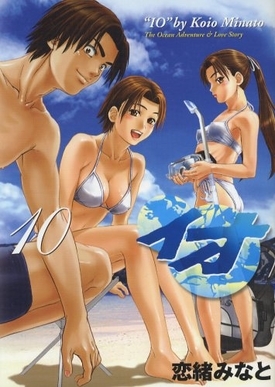 Taiyo Nakabaru is on a school trip to Okinawa. While he is there, he wants to go SCUBA diving off the waters of Zamimi Island, the place where his father disappeared 10 years previously. He gets off the plane at the airport and tries to help a girl with some luggage. A conversation about SCUBA Diving ensues, but when Taiyo lets slip that he wants to see the ocean that his father disappeared in 10 years ago, the girl slaps him and blames him for her mother's death. Taiyo doesn't remember anything about it. Taiyo is then introduced to the Miyara sisters: The oldest is Nagisa Miyara, a diving instructor and the owner of Blue Wave Diving rental shop. Shibuki Miyara, the girl who slapped him, is around Taiyo's age. Finally, there is Mio Miyara, a stoic girl who is younger than the rest of the cast.

However, the vacation Taiyo anticipated is quickly interrupted. He soon witnesses a strange symbol shining from the water, and immediately afterwards in shoved off a cliff, landing in the sea. In it, he sees a white humpback whale. That is not all. Because Taiyo is broke and SCUBA Diving is expensive, he winds up working for Blue Waving Diving Service. Over time, more strange incidents involving the symbol occur, the plot thickens, and more character appear. Motivations and allegiances remain uncertain, characters find themselves at cross-purposes, and the mystery of the symbol becomes ever more pressing.

The series is a mixture of Romance, Slice of Life, Mystery, and Harem. The beginning of the story is rather slow, focusing more on Taiyo's experiences with first coming to Okinawa and the daily activities in running a dive shop.

The series can be compared to Umi no Misaki in that they are both romance series set on fictional Okinawan islands. They both have a dreamy feel to them as well as feature character development and mystery. However, Umi no Misaki has a dreamy feeling that could be described as pleasantly relaxing. IO has a sense of supernatural, unreal urgency about it that makes it a rather gripping read once the plot gets going.