Film / From Hand to Mouth 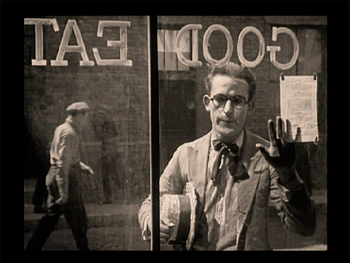 From Hand to Mouth is a 1919 two-reel short film directed by Hal Roach, starring Harold Lloyd. In this film Harold is down-and-out, without funds to pay for the lunch he'd dearly like to eat, befriending a homeless little girl who is as hungry as he is. He winds up stealing some food with the little girl, but is bailed out of trouble by a passing rich heiress, played by Mildred Davis. Later Harold falls in with a gang of thieves, who are plotting to kidnap the rich heiress.
Advertisement:

Harold Lloyd got his start as a Charlie Chaplin imitator, and From Hand to Mouth is something of a transition point in his career. His character here is hungry and broke like The Tramp usually was, but he's in costume as the "glasses" character that he made famous, and despite the dire circumstances Lloyd has the optimism that would be a hallmark of his later films.

This was Lloyd's first film with Mildred Davis, who would be his costar for the next four years, until she married him.