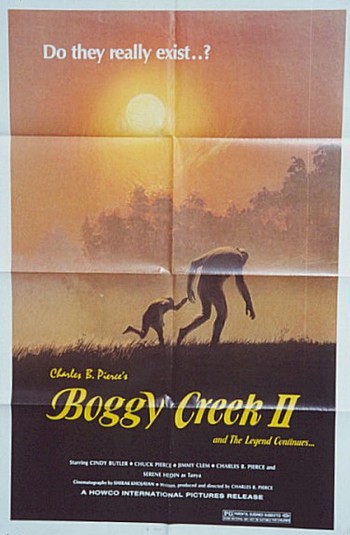 a.k.a. The Barbaric Beast of Boggy Creek, Part II.

Writer/Producer/Star Charles B. Pierce began everything in 1972 with the independent film The Legend of Boggy Creek, which revolved around the legendary Boggy Creek Creature (basically an Arkansas Bigfoot). The film was successful enough (and quite good if you're into the genre) to result in a sequel, Return to Boggy Creek, in 1977 — made without Pierce. A third film, this one involving Pierce, was made in 1982 with the title The Barbaric Beast of Boggy Creek (a.k.a. Boggy Creek II: The Legend Continues).

This movie follows the misadventures of absent-minded University of Arkansas Professor Bryant C. "Doc" Lockhart (Pierce), and his students (one of which is played by Pierce's son), on their camping trip to Fouke, Arkansas, to find and study the creature. Along the way, Pierce narrates stories about other encounters with the Creature.

A few scenes in the beginning of the movie were shot at the university, including an Arkansas Razorbacks football game.

The movie was also reviewed by the New York Daily News' Phantom of the Movies, who gave it a mixed review.