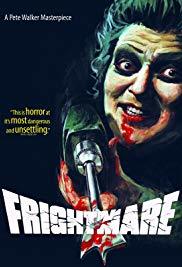 Worse than your most shocking nightmare!
Advertisement:

Frightmare is a 1974 British Slasher Movie.

Dorothy and Edmund Yates are a married couple who just got released from the asylum. You see, Dorothy is a homicidal cannibal, and Edmund feels like he has to cover up her depravities. Unfortunately, Dorothy was not cured, and starts to kill again. Meanwhile, her children live their lives, desperately trying to forget their parents' pasts. But one of them might have inherited her mum's appetites...

The film has received DVD releases from Anchor Bay Entertainment and Media Blasters.