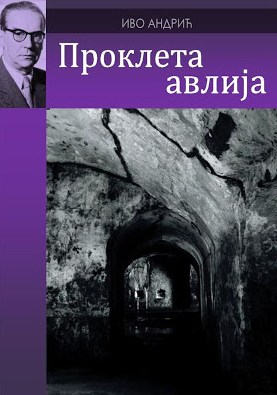 Prokleta Аvlija (eng. The Damned Yard, cyrillic Проклета Авлија) is a 1954 novella (or a novel, depending on who you ask) by Yugoslav Nobel Prize-winning author Ivo Andrić, and is considered to be one of his best works.
Advertisement:

In a nutshell, it's a Slice of Life story set in an İstanbul prison during the Ottoman Empire.The main character is friar Petar, who gets mistaken for a spy and ends up in a prison, nicknamed "the damned yard" by its inmates. He stays there for two months, meeting various people such as prison warden Karadjoz, curious and paranoid Jew Haim, and rich young man accused for conspiring against the Sultan Ćamil. Somewhere around the middle of the book, Petar (and the reader) are told the story of Cem Sultan

, a historical character.The book is notable for its ring structure, and using several different narrators throughout the book.