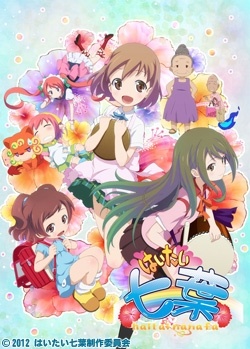 The three sisters, with the grandmother and the spirits in the background.
Twenty-six two-minute episodes of moe slice-of-life in Okinawa, with Okinawan language, cuisine and mythology.
Advertisement:

The three Kyan sisters Nanafa, Nao and Kokona, live with their grandmother in a soba shop in Okinawa. Two wood spirits (Niina and Raana) and one lion spirit (Iina) appear. Of course, all of those (except the grandmother) are cute girls.

"Haitai" is the Okinawan for hello/konnichiwa. It's the female version; the male version is "Haisai". Remember it, it's more important than it sounds. More translation notes.