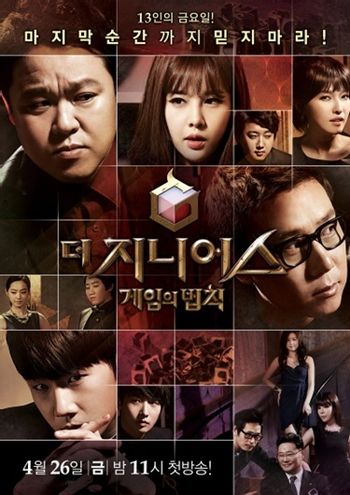 The Genius (Korean: 더 지니어스) is a South Korean reality game show broadcast on cable channel tvN. The first season began airing on April 26, 2013. The show proved to be a hit for tvN and subsequently, three other seasons were aired.

The Genius brings together 13 contestants from various areas to compete for the top spot in rounds involving various games. In every episode, a contestant is eliminated following a main match and a death match. The winner of the main match will gain a token of life guaranteeing their advancement to the next round and in some cases, receives an additional token of life to give to another player as well as a predetermined number of garnets. The worst performer in the main match is automatically sent to the death match, and is allowed to choose anyone without a token of life as their opponent. The winner of the death match gains their opponent's garnets (only in Seasons 1 and 2), and the right to stay in the game.

Season one is subtitled Rules of the Game (게임의 범칙)

The show has become popular enough to have several podcasts dedicated to recapping and discussing it. These include:

An English-subbed version of all seasons can be found here: http://bxrme.tumblr.com/

Tropes found in The Genius include