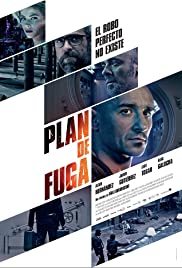 Getaway Plan (original Spanish title of Plan de Fuga) is a 2016 Suspense/Action film written and directed by Iñaki Dorronsoro and starring Alain Hernández, Javier Gutiérrez, and Alba Galocha. Victor (Hernández) is a thief who specializes in blowtorch work who is hired by a group of Russian mobsters to help them break into the Swiss Credit Bank. Victor's skills are flawless, but his background is obscured, one of the other man on the job, Rápido (Gutiérrez), is a junkie who knows more about Victor's life than he wants the mob to know, and Helena (Galocha), a dancer at the mobster's dance club, is determined to worm her way into Victor's life. And, just when it seems things can't get more complicated, Interpol arrives during a planning meeting to arrest the entire gang...