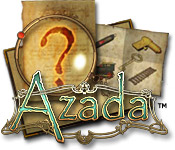 Azada is a series of games created by Big Fish Games (who made both Azada and Azada: Ancient Magic) and ERS Game Studios (who made Azada: In Libro and Azada: Elementa). The first two games have the player being sent to help a man named Titus free himself from an ancient book in order to stop an evil djinn. The ERS games are about Titus, guardian of Azada, asking the protagonist to save his world from destruction.
Advertisement:

This series provides examples of:'