Fanfic / See the Zone and Survive 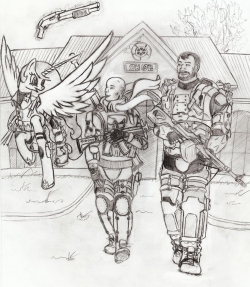 We are S.T.A.L.K.E.R.s: Scavengers Trespassers Adventurers Loners Killers Explorers Robbers. The Chernobyl Exclusion Zone, the most dangerous place on Earth, is our home. Radiation, killer mutants and deadly anomalies are just another day at the office -just another day in the Zone, as we say. We get by, day after day, by scavenging gear, trespassing and exploring in forbidden areas, seeking for new adventures, all on our own; we kill for money, loot or survival and sometimes rob each other. Well, not everyone does the robbing part, that would be the Bandits' job.
I named myself Strider. I am a free stalker and I do not even know what I am doing here, not that I care anyway.
My name is Vano. I'm a free stalker and one of Strider's rare friends. It's a peculiar predicament, trust me.
My name is Celestia. I'm a free stalker and just want to get back home. Well, I wanted.
This is our story.

After an accident with a strange anomaly in the Everfree Forest, Celestia is trapped in an alternate world filled with mutants, killers, an more anomalies; her magical powers are heavily weakened. Now, with the help of two Stalkers (and their future allies and friends) she must learn how to survive in this dangerous place which Zone is and find way to home.

The fic can be read here

It also has a sequel.

The author makes his own cover art too, so, you know, that's cool.

See the Zone and Survive provides examples of: