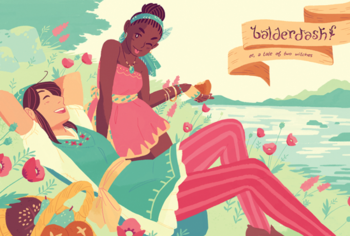 is a webcomic by Victoria Grace Elliott. It tells the story of two witches, Georgie and Afia, whose paths in life lead them both to the village of Löffel. Georgie is a baker in training, hoping to learn under the tutelage of the baker Fausto. Afia is a university student struggling with her thesis, who has left the city to learn about magic hands-on.