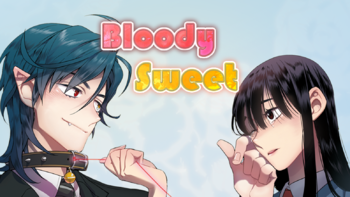 Gloomy Shin Naerim is an outcast in her class. Being the daughter of a shaman, she is avoided by most other girls and pushed around by a group of bullies, including her former childhood friend as the ringleader. Terribly insecure, she barely talks except online, where contrary to real life she's a popular blogger and writer. One day on a school field trip, Naerim is pressured by her bullies into breaking into an old church, where she disturbs a seal holding a 500-year-old vampire, one with a Dark and Troubled Past of his own.

Said vampire, Vlad Fetechou, becomes bound to Naerim as her servant in exchange for her unique "witch" blood, hoping to use it to become human. Romance and angst ensues as girl and vampire both try to get by in a world where they're both outcasts.

The webcomic is complete at two seasons, with the first season focusing heavily on Shin Naerim and the bullying she faces at school, while the second season delves more into figures from Fetechou's own past.

The series is available here

on Tappytoon, although only up to chapter 2 is free and the rest require purchased points to unlock.