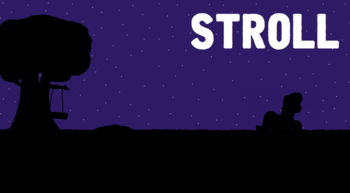 Octavia doesn't like adventure. She just wants to go home.

is a My Little Pony: Friendship Is Magic fanfic written by re- Yamsmos

One day, Octavia decided to go for a walk around town.

A few weeks—then months—later, she became friends with a Griffonian Warlord, had tea with the ambassador of Zebrica, played music for a Draconic god, hoof-bumped a Sea Serpent, stopped a Diamond Dog raid, traveled across an arid desert, joined a pack of Gypsies on a pilgrimage, and found herself in the middle of a bloody race war with nothing but a box of wool socks.

Gods did those things smell.

Inspired by The Descendant's story Zenith

, Stroll shows an alternate version of the "character goes on a walk" theme set by the former. In this story, the main character Octavia never wanted adventure, attempting to take an actual walk around town; the main conflict is her attempting to get back to Ponyville after being kidnapped, and the story details the events that lead up to her finally returning home.