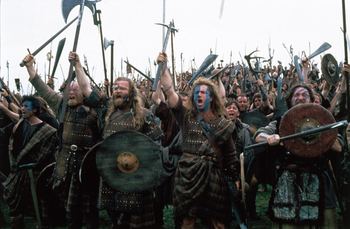 "Like the rocks that break the waves, Highlanders have weathered many storms. The elements battering their lands have made them strong; war has made them deadly."
"SPARTANS! WHAT IS YOUR PROFESSION?"
— Leonidas, 300
Advertisement:

This is where the Badass Crew is taken to the next logical step and turned into an entire army. The Badass Army is made of 100% badasses and there is absolutely nothing that can stop them short of overwhelming numbers or an even more badass Badass Army. There is not a single soldier who can not hold their own in a fight. They are likely to be super soldiers and have a high likelihood to have been raised in The Spartan Way. They will not use Hollywood Tactics, like amateurs.

Count on them to boast many a Colonel Badass, and many more Sergeant Rocks. Almost always commanded by one or several Four Star Badasses.

The polar opposite of Red Shirt Army. A sub-trope of this, where an especially Badass Army is sealed in the can, is the Sealed Army in a Can. Proud Warrior Race is another variant where the members come from a culture that makes an unusually big deal about trying to be this. When the villain has a special unit of these, expect them to be Elite Mooks. Usually an Elite Army. Compare Humans Are Warriors, where having a Badass Army is humanity's hat, and with Men of Sherwood, a smaller scale support crew. Semper Fi is similar, but they are quick to inform you that they are not an army, regardless of the infantry, tanks, artillery, and attack helicopters that they use.