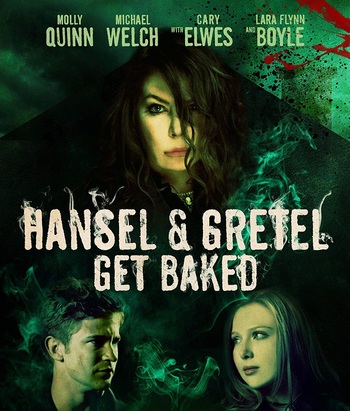 Once upon a time, there was a brother and sister named Hansel (Michael Welch) and Gretel (Molly Quinn). Gretel and her boyfriend Ashton (Andrew James Allen) are potheads who've just stumbled upon a special blend called Black Forest, made by a little old lady from Pasadena (Lara Flynn Boyle). Ashton decides to get a stash straight from the old lady...and that's when the trouble begins. Eventually, Gretel goes on a mission to save her boyfriend...only to get drawn into a terrifying struggle with a witch with a bad case of the munchies.

After awhile in Development Hell (actually, Distribution Hell; the movie was pretty much finished but couldn't find a distributor due to the subject matter), the film was released on DVD in early 2013 by Tribeca Films. The film became available on Netflix in August 2013.

Hansel and Gretel Get Baked contains the following tropes: