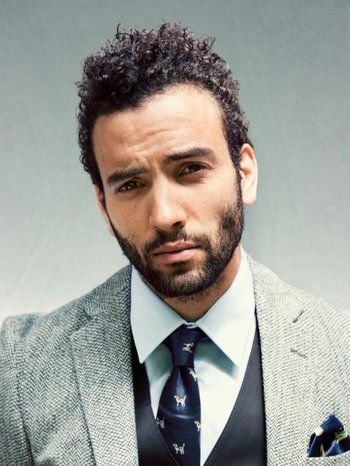 Marwan Kenzari (born 16 January 1983 in The Hague, Netherlands) is a Dutch actor of Tunisian descent.

Kenzari is best known for portraying villainous Jafar in the 2019 remake of Disney's 1992 animated film Aladdin, itself an adaptation of the titular story from Arabian Nights. Upon being announced for the role, Kenzari quickly became noted as "Hot Jafar" on the Internet before the movie was actually released.

Prior to his international breakthrough, Kenzari was mostly known in his native Netherlands, appearing in things like the police procedural Flikken Maastricht.

He made his English-language debut in the 2016 film Collide, followed by the remake of Ben-Hur and historical drama The Promise. He later appeared in Kenneth Branagh's adaptation of Murder on the Orient Express and The Mummy, both in 2017.

He began dating Dutch model Nora Ponse in 2018 after ten years of the two being friends.