This is the hub character sheet for Jewelpet. The majority of the characters have been moved to specific pages listed below, while recurring characters are found in the folders further below. 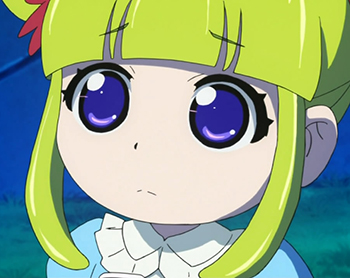 Happiness version.
In all seasons that she appears in, Jewelina is the God and ruler of Jewel Land. She's also the creator of the Jewelpets; the reason why she created them varies from season to season.

In Jewelpet Twinkle, she created the Jewelpets a long time ago from the positive traits of humans. She also created the Jewel Star Grand Prix. She was the one who sent Fealina to Earth, where she met the man who'd become the father of her children. Alma thinks Jewelina is responsible for Fealina's death and wants to take revenge against her.

In Jewelpet Sunshine, there's much more emphasis put on her maternal status towards the Jewelpets. She's fairly immature and can be over-dramatic, but takes any threat to Jewel Land quite seriously.

In Jewelpet Kira Deco!, Jewelina created the Jewelpets through the Mirror Ball so she had someone to dance Go-Go with. However, when the Mirror Ball was destroyed and the Deco Stones were scattered all over Jewel Land, her sadness turned her into stone.

In Jewelpet Happiness, Jewelina is the young ruler of Jewel Land and the Headmaster of the Jewel Academy, who gives Ruby and her friends the Magical Jewel Box. She assigns Ruby to open a Cafe beside the cafeteria. She is concerned about the Red Moon and investigates how to stop it.

After not being heard of in Lady Jewelpet, she makes a return in Jewelpet: Magical Change with a twist (look below). 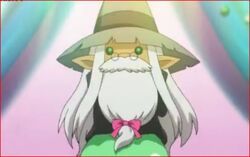 Moldavite is the headmaster of the Magic Academy. In the first series, he's pretty much your average old man, and appears infrequently throughout the series.

In Twinkle, he's very jolly, likes karaoke and to make orders through the magical catalogue. He's often scolded or punished by Halite. Despite his antics, his magical level is about the same level as Jewelina's. He's Rin's partner. During the Jewel Star Grand Prix, he's revealed to have several siblings, all of which strongly resemble him. The difference is in the color of the clothes and some mannerisms.

Halite is the homeroom teacher of Ruby's class in Jewel Land in the first series. She is an expert magician who teaches the Jewelpets how to use their magic. She's also reported to from the human world through a computer.

In Twinkle, she's Akari and co.'s homeroom teacher. She sometimes scolds Moldavite due to his antics. Her Jewelpet assistants are Luna and Milky.

Sulfur is one of the male teachers of the Magic Academy. In the first series he is portrayed as determined and brave. He is a supportive teacher to all the Jewelpets.

In Twinkle, he's the scaredy cat of the Magic Academy and has a streak of bad luck. His other self, who's a charming and confident adult version of him, appears in some episodes, though the ways through which he appears vary from episode to episode. He's Tour's partner.

Ametrine and Trystine are minor charaters and the owners of Jewel Land's Magic Shop. They are identical twin cats with golden colored fur and wear purple Arabian-style clothing, cream colored capes and crowns. Their heterochromic eyes are arranged differently (Ametrine's left eye is purple while her right eye is red and Trystine's are reversed). They give the Jewel Pod and the Rare Rare Drops (a candy that allows Jewelpets to speak human language) to Ruby, in Twinkle. The twins have good knowledge of magic, but not to the extent of the teachers of the Magic Academy. Tametorin possesses a Jewel Pod, which is used to browse spells. The twins appear in episode 14 of Kira Deco as cameos. 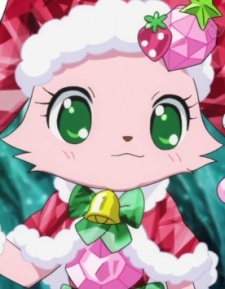 Avenue is the waitress of the Strawberry Cafe. She is a pink rabbit wearing a pink waiter's outfit with strawberries. She is rarely seen in the series, and is not an important character. Avenue has one appearance in Twinkle and two appearances in Kira Deco.
Sweetslandians 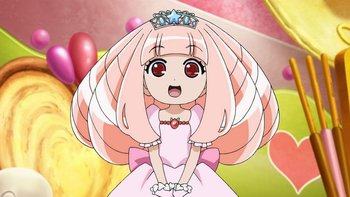 The daughter of the rulers of the Sweetsland Kingdom, Mana is celebrating her seventh birthday. Despite her high class upbringing, Mana wants to be a manga artist. She loves cake and dancing. She wields a crown that allows her to collect magic from the Sweetspets and use it. 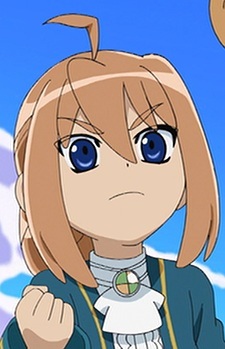 The young duke of the Sweetsland Kingdom, who wants the whole kingdom for himself. He wants to marry Mana in order to attain his goal, but she turns him down, spurring him into trying more violent measures.

A nobleman of Sweetsland with a cartoony design. He's a loyal servant to Mana and her family. He suspects Park, albeit without being antagonistic towards him.

The King and Queen of Sweetsland