These are all the Jewelpets of the Magical Black class. See here for the hub character sheet and here for the franchise page. 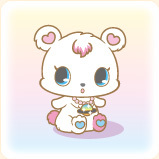 Jewelina: Look around you, Labra. This universe has no boundaries. (…) It’s just like your magic. Because your magic is the power of the universe itself. You have the potential for infinite power.
"Labu~!"
The Jewelpet of Mischief/Hidden Powers, Labra is a pink and white polar bear cub with blue heart-shaped paws and ears who wears a necklace shaped like a multi-colored ringed planet. Her birthday is on December 27 and her name is based on the mineral labradorite.

Debuting in episode 39 the first series as a baby Jewelpet born through Raku Majo's magic, she's a genius child who has the Super Crystal Class ranking, which means that her magic is always powerful and successful.

In Twinkle, Labra is introduced in episode 3 spying on the classes of the Magic Academy and pranking its students. She wishes for her own human partner, but everybody she asked turned her down. She's incapable of using magic, although she releases a great deal of power when placed under stress. Because of this, Nicola accuses her of not being a Jewelpet, which drives her over the edge and makes her break Moldavite's statue. Akari then requests to be her partner and fixes the statue with her help, awakening Labra's dormant powers in the process. Labra is capable of amplifying the power of the spells cast by Ruby and Akari. She doesn't stay as often as Ruby (who acts like her big sister) in the human world.

In Sunshine, she is part of the Plum class and shares a room with Angela. She is gifted with immense power, but has too little common sense to use it wisely. She has visions of Jewelina more frequently than any other Jewelpet.

In Kira Deco, she, alongside Angela, is a patrol officer of Jewel Town. Despite her cute looks, she is a licensed police officer who can sentence anyone to jail for more than 600 years. She accepts high amounts of Deco as bail, which is how Pink and Blue escape imprisonment in jail.

In Happiness, she is one of Ruby's friends who is given a mission to make friends and run the Jewel Cafe. She works as a waitress. She has a bit of a rivalry with Rosa. 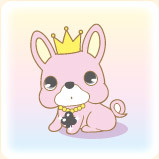 The Jewelpet of Health, King is a pink French bulldog who wears a gold crown and a necklace shaped like a black club (as in, the card suit). His birthday is on August 10. He's the only Jewelpet whose name isn't based on its jewel, onyx.

In the first series, he's awakened by Hattori in episode 7, when Diana's curse causes him to fall ill. Because of his Acrylic Class rank, his healing power is very painful to those who go through it, but Hattori is strong enough to manage. Later, he reveals that he's in search of Lapis, who he's in love with. When it turns out she's under Dian's possession, he half-heartedly joins him to be with her.

In an episode of Twinkle, Ruby dresses up as King to pass for male and to try to become Nicola's partner. King himself appeared on episode 43 as one of the judges of the Jewel Star Grand Prix.

In Sunshine, he's a small-time villain of sorts and appears alongside Brownie and Alex, who function as his lackeys.

In Kira Deco, he is a Con Man selling items made of jewels which he claims to have magical properties. Seeing Pink and Ruby feuding, he convinces Ruby to give him the Deco Stones in exchange for his items. Though at first he cares little for Ruby and Pink's relationship, Ruby's determination ends up touching his heart and he gives her some advice (masked as a 'jewel of courage') for free. However that doesn't stop him from getting arrested and giving back the Deco Stones.

In Happiness, he is the new, popular student at Jewel Academy. He becomes Red Mooned over his demeaning thoughts about Machiko's isolation and becomes a delinquent. Machiko believes he's still good at heart and draws a manga to prove it. It touches King's heart and he recovers, forming a Magic Gem.

In Magical Change, he serves as Sumire's pet dog, under the name "Monohime". He is the least popular Jewelpet in Jewel Land and his magic isn't very good. He is also one of the Jewelpets to achieve their human form. 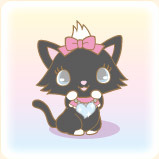 The Jewelpet of Charisma, Diana is a black munchkin cat with white paws. She wears a lace-trimmed pink waistcoat, a pink bow, and a silver heart-shaped necklace. Her birthday is on April 20. Her name is based on diamond.

In the first series, she's the first real villain that Rinko has to contend with, as she's the one responsible for casting the curses starting in episode 4; through them, she hopes to awaken and capture Jewelpets. In episode 19, it is revealed that she was awakened during the events of episode 2 by taking in Rinko's magic. She is technically bonded to Sage, but treats the Phantom Herb Thieves as nothing more than disposable lackeys; they follow her anyways because of her promises of a better life for them. Later, it is revealed that her purpose is to awaken her brother Dian, which she achieves in episode 33. She gets relegated to second-in-command from there on. She hates any girl who becomes too close to Dian, and her jealousy often interferes in his plans.

In Twinkle, she is Alma's partner, and they are the main villains of the season. She is very playful and enjoys cruel pranks, while boasting about how powerful she and her partner are compared to everyone else.

In Sunshine, she is a student from the Rose class and Garnet's rival. She is the idol of her class and looks down on the Plum section like nobody else. She once dated Dian and managed to get back with him after much drama involving Garnet.

She primarily functions as a gag character in Kira Deco. She wears a bald wig, never speaks, and characters keep running into her in odd situations. Late in the season, she reveals herself to have watched over the KiraDeco 5's actions and decided to take them to Smooth Land to force the group to make her laugh. 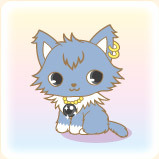 The Jewelpet of Self-Control, Dian is a grey Maine Coon cat with a white ruff and paws. He wears a gold necklace with a black orb and two earrings on one ear. Dian's birthday is on January 20 and his name is based on the igneous rock obsidian.

Debuting in episode 33 of the first series, he's the main villain of the season. In ancient times, because he thought the humans were taking advantage of the Jewelpets' powers, he lead a rebellion against the Four Great Magicians, who put a stop to it and sealed him in an iceberg on Earth. After Diana unseals him, he decides to take revenge against those who did him wrong and to try and conquer both worlds. He corrupts eight powerful Jewelpets, the Jewel Eight, and challenges Rinko to the Jewel Games, betting the Jewelpets he corrupted against Rinko herself. He desires the Jewel Stick; however, only Rinko can make use of its power. When this doesn't go as planned, he resorts to turning into Rinko's dream Prince Charming in an attempt to seduce her.

In Twinkle, he's Leon's partner. They first met when Leon's dog died, and Dian told him to live with his head raised high and to not let its death go to waste. When the season starts, Dian's suffering from muteness, which is later explained to be caused by him having seen something he shouldn't have (specifically, Diana's creation by Alma). He gets healed after confronting what he saw again.

In Sunshine, he is in the Rose class and is a TV star. In episode 25, he noticed Garnet when she helped him mend his outfit for one of his gigs and they started dating. However, Diana, his former girlfriend, was still in love with him, and fought with Garnet over him. Garnet ended up giving up on him for Diana's sake, though he did inspire her to try harder to chase her dream of being a star. He appears a couple of times afterwards, with Diana.

In Kira Deco, Dian is part of Decoranian's Four Heavenly Kings, the highest ranking agents in the organization. He wreaks havoc in Jewel Town in episode 35, turning the denizens into cards. He nearly defeats Angela and Retsu in a card duel, only to commit the mistake of summoning Labra and Midori as his last cards, enraging Retsu and Angela, who disregard the game and attack Dian directly, breaking through his barrier and defeating him.

In Happiness, Dian is the host of a famous show about cooking vegetables, and works for Jewel Academy by providing the cafeteria with the best vegetables. The Red Moon influences him and he loses his sense of smell, which helped him with his job. With his gift gone, he falls into a depression. After the cooks discover that they committed a mistake in a dish which even Dian's numbed nose could detect, he regains his confindence and his sense of smell, and creates a Magic Gem with everyone present. 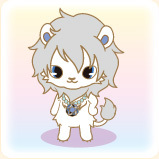 The Jewelpet of Security, Granite is a white lion who wears a blue jewel necklace. His birthday is in December 1 and he is named after the stone granite.

He appears for the first time in the last episode of Sunshine. In this continuity, he's Mikage Shiraishi's new form which he adopted with Jewelina's help in order to get together with Ruby as a couple.

In Kira Deco, Granite is Ruby's boyfriend and lives in the neighbouring town.

In Happiness, Granite is a space traveller whose spaceship crash-lands in Jewel Land during the Red Moon's siege. Ruby and co. help him fix it.

In Lady, Granite is a fortune teller who foresees an omen in Lillian's future and warns Miura of it.

In Magical Change, he's Ruby's rival. He collapses because of an illness that warps his personality and the gang needs to find a cure to save him. 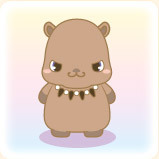 The Jewelpet of Endurance, Coal is an ash brown capybara with brown paws who wears a jewel necklace resembling buddhist prayer beads. His birthday is in September 6 and his name is based on the sedimentary rock coal.

Coal debuts at the end of episode 2 of Kira Deco, working with the Decoranain, the group responsible for plunging the human world into darkness using Dark Magic, as an assassin. He is bossy, very boastful and impatient, though he tries to keep up a cool front around his allies Opal and Io. His goal is to find the Deco Stones and give them to his shrouded master while making sure the Kira Deco 5 are out of the way. He and his lackeys get beaten every episode.

In Happiness, he works various jobs in search of a Magic Gem. In episode 37, he loses all of them and becomes depressed. He finds a doll, possessed by the Red Moon, who pampers him with supportive words. He discovers that the doll belongs to a little girl named Yumika, but refuses to give her back. When the doll expresses that she misses Yumika very much, breaking away from the Red Moon, he yields and forms a Magic Gem with the girl, beginning the 3rd stage of the Jewel Box. 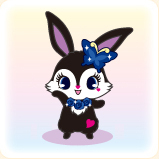 The Jewelpet of Truth, Luea is a black and white Dutch rabbit with heart symbols below her left eye and on her left leg. She wears an indigo rose necklace and an indigo butterly hairclip on her head. Her birthday is on August 28 and her name is based on blue apatite.

She debuts in Lady, where she's Lillian's partner and Ruby's rival.