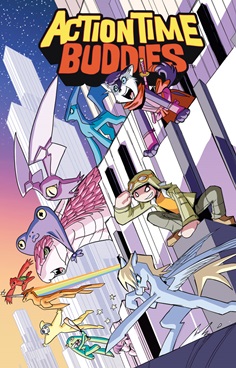 is a webcomic from the minds of Antarctic Press veterans Robby Bevard (head writer for the latter Vol 2 of Ninja High School) and Fred Perry (Gold Digger, The Littlest Zombie, Zombie Kid Diaries).

It follows the misadventures of Kid (a human character with a pilot motif), his friend Bro (a Pegasus), and newcomer Artie (a wolf and a ninja) in their rather strange world that they live in while hanging out with one another.

As per the course with a lot of Rob and Fred's work, this one's a parody using archetypes from shows like Adventure Time, My Little Pony: Friendship Is Magic, Thunder Cats and others and blending them together to create a rather unique world. Fred stated his goal with the comic isn't big storylines but general character interaction and having fun with them and the locations they visit.

Comic books and volumes will be distributed through Antarctic Press's website. Ultimately became an Orphaned Series as Fred got too busy to continue it and eventually the website that used to host it went dead with no word from either Robby or Fred on if they wish to keep going.