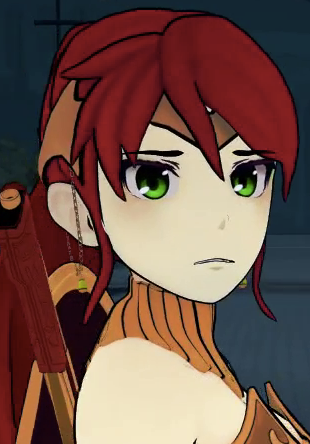 Pyrrha after learning you dip cookies in ketchup.​
All Beacon proved to be for Pyrrha Nikos was training for her shiny new career in the illustrious field of idiot wrangling. When life forces her to lead a team of anti-social weirdos, morally deplorable thieves, and manic depressive losers, she’s got to balance her increasingly fragile sanity against a team hell-bent on becoming the clear and present danger to the future of Remnant through their own sheer incompetence. With the White Fang and Grimm both smarter, tougher, and better lead than ever, it’s starting to dawn on her that some divine being has it specifically out for her. Yay.
Advertisement:
Welcome to team PINA, Pyrrha. The first drink’s free.

is what happens when two writers decide to get together and take on the dark, Grimm world of RWBY OC fanfics with nothing but humor, action, and the occasional attempt at serious storytelling.

A More Flawed Gem begins at the start of RWBY Volume 1, and mostly told from the point of view of three OC characters—Cielo Noel, Indigo Jack, Cards Adler—and Pyrrha Nikos. Starting off as more or less a retelling of the original story from the perspectives of three new characters (and Pyrrha), it very quickly spiraled off the rails ever since the Emerald Forest arc and has since become its own story.

“Fuck you, you stupid asshole,” Indigo said, tears in her eyes. “I hate the armor. I can’t strangle the godsdamned life out of you! Mom is so worried. How the dicksauce did you ever get accepted into Beacon? I’m gonna murder you!”
"This is Vale. Everyone smokes here."
“Yes, Harold,” Ozpin said in a firm voice, “it’s true. Beacon’s been compromised. We’re at war.”
People are dead, Ruby!