Manhwa / I'm at End of Your Sight 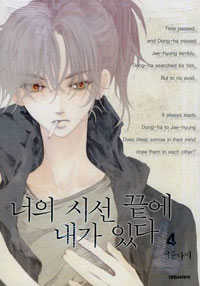 Je-hyung who is left alone after his mother's death quits school and starts to work. On his way home he meets a boy, Dong-ha, who doesn't seem to have any place to go and brings him to his house. He disappears next morning, and three years later they meet again.

Also known as Lost In Your Eyes, this is an on-going manhwa by Da-Mi Seo Moon.