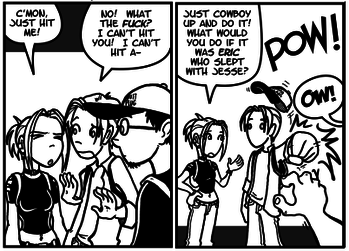 Blue Beetle: I'm no fan of hitting girls.
Supergirl: Heh, you'd be lucky to tickle me.
Blue Beetle: Yup, I kinda would be.
— Injustice 2

Action heroes (or villains) who invoke this trope even though they face female opponents find various ways to get around it. At minimum, they'll make a quip along the lines of "I normally hate hitting women, but in this case I'll make an exception" or "I don't hit ladies, but you're no lady" before they start to strike back. They might try to find creative ways to defeat her nonviolently, perhaps through trickery; they might try to minimize the necessary violence by using grapples or pressure point attacks rather than actual blows; or tearing off their clothes; or they might get off on a technicality by doing something that indirectly results in physical harm to the female opponent without actually striking or firing a weapon against her. In supernatural settings, the problem may be resolved by the male character temporarily turning into a woman (or the enemy into a man), voluntarily or not, thus freeing him from a gentleman's obligations toward the fairer sex. Alternatively, the woman may become a One-Winged Angel so the man isn't even fighting a human, much less a woman, anymore: think Maleficent's transformation into a dragon at the end of Sleeping Beauty. In team stories, this often leads to the Designated Girl Fight, where female members of heroic teams always seem to end up being the ones who take on the female villains.

Due to Media Watchdogs, this trope is often quietly applied without being explicitly invoked, especially in cartoons and other media aimed at children (like in the Sleeping Beauty example mentioned above). (For example, This is often noticeable even when feeling obligated by the trope would seem completely out of character, or when the overall message of the work seems to undermine the whole women are weak and need protection idea that forms the justification for the trope. Sure, the work never says or implies that the female characters' combat skills are in any way different from their male counterparts', but somehow by pure coincidence the token female team member is always the one who ends up fighting the female villains.

Sometimes the reason is pure PR: even if a guy is justified and doesn't mind hitting a girl, chances are he will be seen as a thug if he does. This is Truth in Television as many a man defending himself in real life has been attacked by bystanders, mobs and even the police upon being seen hitting a girl, context be damned.

Often a form of Heroic Vow. May be a form of Innocent Bigotry when it's portrayed as sexist, but the male character genuinely had no idea that some people would see it that way. Compare Would Not Shoot a Civilian, which encompasses this in settings where women are not combatants. See also Rape Is a Special Kind of Evil. A Wife-Basher Basher lives out this trope with righteous fury. Contrast Get A Hold Of Yourself Man, the one situations where he can hit a girl.

open/close all folders
Advertising
Anime & Manga
Yusuke explains that he opened the fight by groping Miyuki on both the chest and crotch, the latter because something didn't quite feel right about the breasts. When Kuwabara asks if this means that Yusuke would have taken it easier if Miyuki had really been a girl, Yusuke refuses to answer. When Miyuki herself claims that Yusuke was actually extra rough because of her true nature, Yusuke batters her unconscious and insists he treated her exactly the way he would have treated any of his opponents, male, female or in-between. In essence, the scene manages to play the trope straight, avert it, and then subvert it in rapid succession.
Comedy
Comic Books
Comic Strips
Fan Works
Films — Animation
Films — Live-Action
Literature
Live-Action TV
Politics
Pro Wrestling
Theatre
Video Games
Web Animation
Web Comics
Loserz strip. Fortunately, Jodie isn't one to take things laying down, as seen here

What also makes people feel bad about the idea of hitting Toph (before they realize she's an unstoppable badass) besides the fact that she's blind and a girl is that (1) she's twelve years old and (2) she's actually kind of small for her age.