Characters / The Book of Mormon

Characters who appear in the musical The Book of Mormon. Unmarked spoilers ahead.

The religious text has moved here.

Andrew Rannells as Elder Price
Notably portrayed by: Andrew Rannells (OBC), Gavin Creel (Original West End), Nic Rouleau (Tour)
Elder Kevin Price is the poster boy for Mormonism - he's idealistic, he's devoted to Heavenly Father, and now that he's nineteen, he's ready to go out on his mission and do something incredible. Unfortunately, rather than his dream location of Orlando, he's sent to Uganda with a fellow missionary who's never actually read the holy book they're expected to preach. While devout and earnest, Price has an incredibly inflated sense of self-importance and a huge ego, which puts him in a rough spot when his faith is challenged.
Advertisement:
Elder Cunningham

Josh Gad as Elder Cunningham
Notably portrayed by: Josh Gad (OBC), Jared Gertner (Original West End), Ben Platt (Tour)
Elder Arnold Cunningham is an enthusiastic but childish young Mormon who's excited to go out and proselytize with his new "best friend"... even though he hasn't actually read the Book of Mormon. He also has a very active imagination - that is to say, he lies a lot. This causes problems in the remote Ugandan village they've been assigned to.
Nabulungi 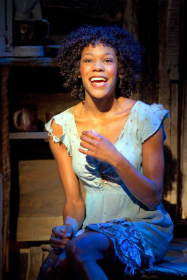 Nikki M. James as Nabulungi
Notably portrayed by: Nikki M. James (OBC), Alexia Khadime (Original West End)
Nabulungi is the daughter of the head of the village of Kitguli. She's friendly, idealistic, and unlike the rest of her village, is actually interested in what these strange white boys have to say. In particular, she takes a liking to Elder Cunningham, and is ready to believe anything he tells her.
Elder McKinley 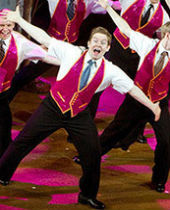 Rory O'Malley as Elder McKinley
Notably portrayed by: Rory O'Malley (OBC), Stephen Ashfield (Original West End), Grey Henson (Tour), Pierce Cassidy (Tour)
Elder McKinley is the District Leader of District 9. He's just as friendly and enthusiastic as the other Mormon boys, but is more than a little disheartened by his District's lack of baptisms in the three months they've been in Uganda. He is most certainly not gay.
Mafala 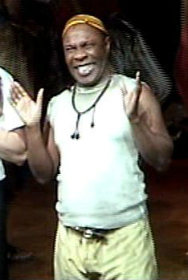 Michael Potts as Mafala
Notably portrayed by: Michael Potts (OBC), Giles Terera (Original West End)
The head of the village of Kitguli, he welcomes Elders Price and Cunningham to Uganda - and makes it immediately clear to them that religion is far from his village's top priority. He is also Nabulungi's father.
The Elders of District 9

The Elders of District 9

The rest of the District 9 missionaries - Elders Thomas, Zelder, Michaels, Neeley, Schrader, Church, and Davis. As a group, they're all friendly, enthusiastic, and almost as repressed as Elder McKinley.
Advertisement:
General Butt-Fucking-Naked

A ruthless and widely-feared warlord who received his nickname from his habit of stripping naked before murdering somebody.